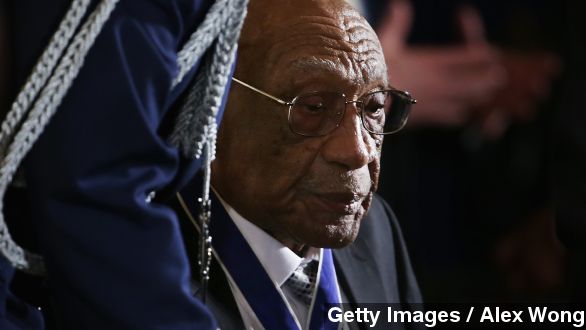 Charlie Sifford broke down golf's color barrier in 1961. He won two PGA Tour championships and was awarded the Presidential Medal of Freedom in 2014.

Charlie Sifford, the man many people referred to as "the Jackie Robinson of golf," has died. He was 92.

According to Cleveland.com, Sifford died of cardiac arrest. He had reportedly suffered a stroke weeks prior.

During his career, Sifford won the UGA National Negro Open six times but was excluded from PGA competition due its "Caucasian only" policy. (Video via WEWS)

But Sifford was adamant about changing that, even though he received death threats in the process. In 1961, Sifford broke down golf's color barrier and became the first black man to earn a PGA Tour card. (Video via Back9Network)

Sifford went on to win two PGA Tour championships — one in 1967 and the other in 1969. He also became the first black man inducted into the World Golf Hall of Fame in 2004.

And in November of last year, the golf pioneer was awarded the Presidential Medal of Freedom from President Obama.

According to the World Golf Hall of Fame, Sifford found inspiration from Jackie Robinson and even spoke with him about his plans to break the color barrier in golf.

"[Robinson] asked me if I was a quitter. He said, 'OK, if you're not a quitter, go ahead and take the challenge. If you're a quitter, there's going to be a lot of obstacles you're going to have to go through to be successful in what you're trying to do.' ... I made up my mind I was going to do it. I just did it. Everything worked out perfect, I think."