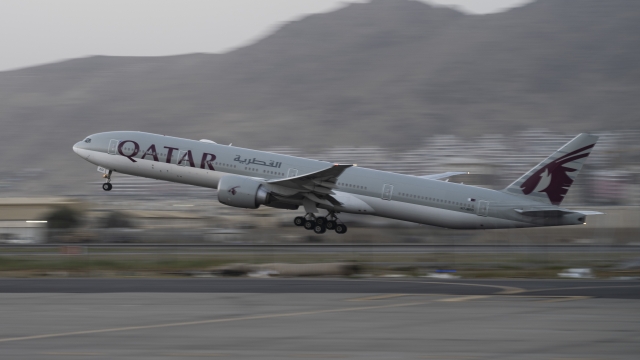 This comes one day after another flight carrying an estimated 200 foreigners, including Americans, departed from Kabul.

A second commercial flight departed from Kabul Friday and a Qatari official said the plane was carrying 158 passengers.

This comes a day after an estimated 200 foreigners, including Americans, left Afghanistan on a commercial flight with the cooperation of the Taliban — the first such large-scale departure since U.S. forces completed their frantic withdrawal over a week ago.

The Qatar Airways flight to Doha marked a breakthrough in the bumpy coordination between the U.S. and Afghanistan's new rulers. A dayslong standoff over charter planes at another airport has left hundreds of mostly Afghan people stranded, waiting for Taliban permission to leave.

U.S. Could Admit More Than 50,000 People From Afghanistan Airlift

Homeland Security Secretary Alejandro Mayorkas said more than 40,000 people have already arrived in the U.S. and that number is expected to rise.

"Now, not all of them ultimately chose to depart Afghanistan today. In our engagement with them, they offered a number of different reasons," Price said during a press conference Thursday. "Some wanted more time to consider it. Others wanted to remain with extended family, at least for the time being. Others cited medical issues."

Hundreds of other Afghans who say they are at risk for helping the Americans have gathered for more than a week in the northern city of Mazar-e-Sharif, waiting for permission to board evacuation flights chartered by U.S. supporters. Many are believed not to have the necessary travel documents.

Price confirmed during the press conference that no charter flights have taken off from the airport in Mazar so far.