Check Out This Hoverboard That Actually, Y'Know, Hovers 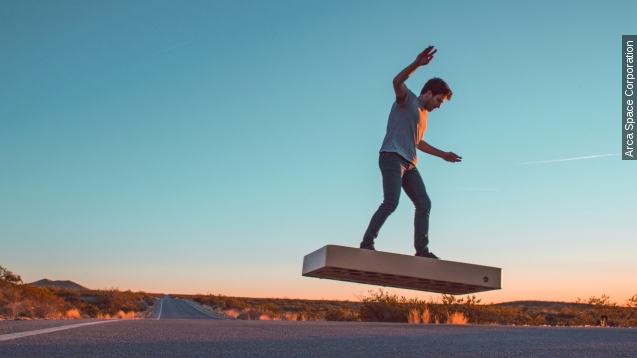 Aerospace engineering company ARCA has revealed a hoverboard it calls the ArcaBoard. Cool thing is, this one actually hovers.

Anyone else annoyed by all those "hoverboards" that don't actually hover?

"It has two wheels and you've heard it being called a hoverboard," said Brian Tong in a CNET video.

Well, ARCA Space Corporation has revealed a hoverboard that isn't lying to you.

"What if we could all experience flying? What if, for a moment, every person on planet Earth could live out their dreams?" asked the narrator in a video from ARCA Space.

It's called ArcaBoard. It's packed with 36 fans to lift up to 243 pounds a foot off the ground.

ArcaBoard uses onboard sensors to keep the vehicle stable.

• Stabilization turned on: Use your phone to control ArcaBoard.

• Stabilization turned off: Use your body to control ArcaBoard.

An honest-to-goodness hoverboard is awesome. But there are caveats.

It only flies for three to six minutes on average before it needs charging.