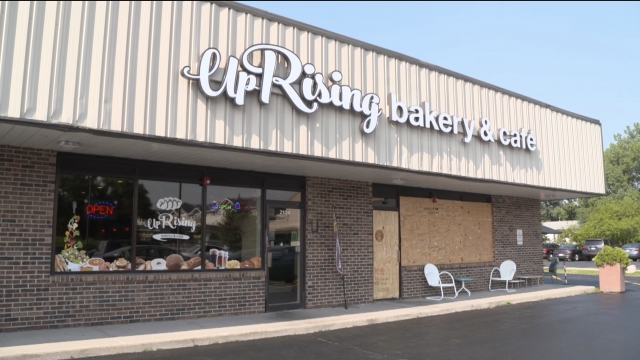 A Chicago bakery attacked for planning a drag brunch is now allowed to host the event, but the journey to get there wasn't easy.

After weeks of backlash over plans to host a drag show brunch, Uprising Bakery and Cafe outside of Chicago, Illinois, is back in action.

"So essentially we wanted to start hosting more events and diversify our events, so we booked a drag show to be here at our bakery and café," owner Corrina Sac said.

After posting plans for the event in early July, Sac says the business began receiving a wave of hateful comments on social media.

"Literally overnight, I woke up and there were hundreds and hundreds of fake bad reviews, negative comments, emails, comments, voicemails, anything that you can imagine," Sac said. "It was just hateful. Talking about how we're pedophiles, how we are groomers, how we are all different kinds of stuff."

Those threats turned into an attack on the Illinois bakery.

"The night before the event, leading into the morning of the event, someone came and broke three of our windows, our employee entrance door and then spray painted a bunch of horrible things on the side of our building," Sac said.

Days after the attack, Sac says she was working to reschedule the drag show when she was informed by the village of Lake in the Hills that her business wasn't allowed to host any events at all because she didn't have the right permits.

"It was just very coincidental, right after a hate crime was committed against us, right after the drag show, which was extremely controversial, and now the village and our landlord are saying, 'No you can't have events,'" Sac said. "It was just too slippery."

Ultimately, Sac says she and her legal team were able to reach an agreement with the village, but the journey hasn't been easy.

"Honestly, I think it's a mixture of fear, [discomfort] and lack of education," Sac said. "A lot of people, if it makes them uncomfortable, they are afraid of it."

In suburban Chicago, the drag show was rescheduled, but the incident illustrates a conflict playing out around the U.S.

From Florida to Texas, some Republican lawmakers are condemning events in businesses and public places that incorporate drag shows where minors are present.

"Targeting these kids with all this stuff — it used to be kids would be off-limits, used to be everybody agreed with that, and now it just seems like there's a concerted effort to be exposing kids," Florida Gov. Ron DeSantis said.

DeSantis recently filed a complaint against a restaurant in Miami after a video showed children in attendance at a drag show being hosted there. The complaint argues that the restaurant violated the state's public nuisance law.

Other lawmakers in Florida, including state Rep. Anthony Sabatini, are now proposing legislation that could charge parents with a felony and terminate their parental rights if they bring their child to drag shows.

Meanwhile in Texas, state Rep. Bryan Slaton has announced plans to file a bill that would ban drag shows in the presence of minors in Texas.

In New York, Drag Story Hour NYC says it puts on programs at schools, libraries and festivals as a way to celebrate gender diversity, build empathy and give kids confidence to express themselves. But a $200,000 city contract with the group led New York City council member Vickie Paladino to object, saying while adults have a right to embrace their sexuality, events such as Drag Story Hour encourages what she called "gender radicalism" in kids.

The issue isn't just a U.S. one; in the U.K. a Story Hour hosted by drag queen Aida H. Dee was stormed by protesters who said the event was not appropriate for children. For future events, organizers came up with a plan to keep the detractors away.

Back in Illinois, Sac finally held her show without interruption.

"It's not our job as LGBTQ people to educate, but if some of us are comfortable doing it, then we should take it upon ourselves to do it — that way we can help solve the problem," Sac said.