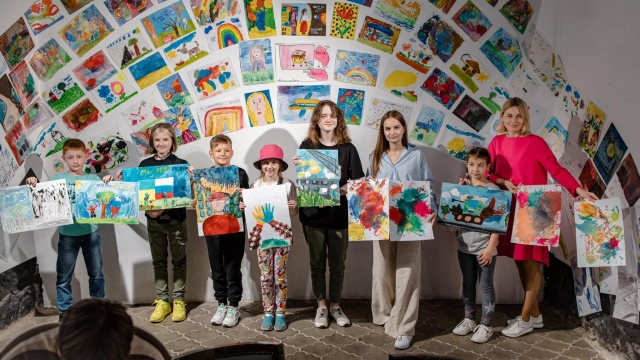 A mother and daughter, who are art teachers from Lviv, Ukraine, opened a new exhibition called "Children of War" at a Chicago Ukrainian museum.

For any artist, final touches ahead of an exhibition are crucial. And for this Ukrainian artist and her daughter, the artwork is beyond precious.

The paintings they're installing are from "Children of War."

"We just go to the hospitals, orphanage and start working with those kids," Yustyna continued.

Being from Lviv — a city in western Ukraine where many refugees settled — they started giving art therapy classes to children who've been traumatized — some as young as 2 years old.

Ten months later, they're exhibiting some of the artwork at Chicago's Ukrainian Institute of Modern Art, bringing it to North America for the first time.

"The only one thing we worried about when we came to the U.S. is just not to lose our luggage with pictures," Nataliia said.

Behind the 155 pieces of art in the exhibit are stories of children who have survived unimaginable horrors.

An 8-year-old dog named Bice goes to a rehabilitation center weekly to help children traumatized by Russia's war in Ukraine.

"As you see, the work is very bright and full of life," Yustyna said. "But then, we just ask her, 'How are you? Do you have family? Do you have siblings?' And then, she says, 'Yes. I have.' And then, 'Oh, no. I had.' Because the Russian military just killed her sister under her eyes."

The stories are sickening. Yet for the two art teachers — and millions of Ukrainians — it's the constant cost of the Russian invasion.

"We don't want that people forget what's going on in Ukraine, because it is our everyday life and we want to show it to the world," Yustyna continued.

Even in the face of such tragedy, many children in the program decided to use bright colors and express hope and humor in their art.

"This story is about the sniper who sits for so long in his place [that] a bird creates a nest on his head," Yustyna explained.

Yustyna says she and her mother have created deep, emotional bonds with the children.

"They are very happy when we come and draw with them," she said.

And they've seen, firsthand, the benefits of art therapy.

"Every kid, after we finish our master classes, say that this is the happiest day in their life," Yustyna continued.

At the exhibition opening, it's schoolchildren from the local Chicago-Ukrainian community who get to learn about the art, in their native Ukrainian.

Most of them have relatives in Ukraine.

A school in Chicago's Ukrainian Village has opened its door to more than 70 refugee kids as Russia continues its invasion.

Some even have family in Russian-occupied territory.

"Sometimes we don't even know if they're alive because we can't communicate with them," Ukrainian School of Chicago student Kateryna Voroshylkna said.

So, the exhibit brings intense feelings.

"It was both kind of happy and sad at the same time, because I see ones that are from Mariupol, or some places that have been bombed really badly. It's just heartbreaking because I understand that these are small children and they don't deserve any of what's happening right now," Voroshylkna said of the art. "But then, seeing some of the ones where they wish for a brighter future or they wish that flowers grow again — it's just heartwarming to me."

As for the art teachers, they say they feel great about creating a bridge between children in Ukraine and children in America.

"There is no difference between kids. Kids are kids," Yustyna said.

The exhibition will last until Feb. 12.

When it's over, you can bring home some of the artwork.

The price is at your own discretion and the proceeds will help Nataliia and Yustyna continue the art therapy program.

Though the therapy may be needed for years, the art teachers hope they can do their part to cut short the war.