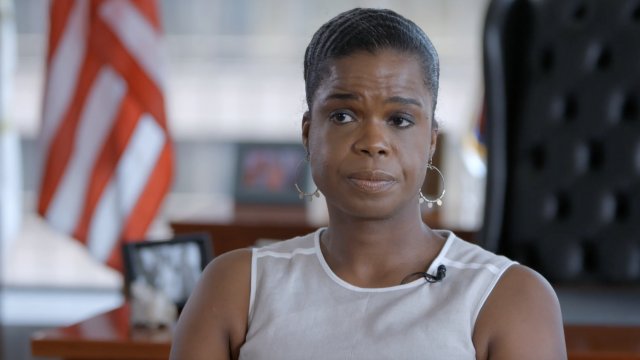 Foxx has prosecuted far fewer cases than her predecessor, and stubborn gun violence amid the pandemic has made some question her reforms.

Chicago is home to the second-largest prosecutor's office in the United States with more than 700 attorneys on staff, responsible for 5 million people. Kim Foxx is the first Black woman to hold the Cook County state’s attorney job.

Foxx, who grew up in public housing, won in 2016 and was reelected in 2020 on promises to reform this enormous department — a department that handles more than a quarter million cases a year, from misdemeanors to murder.

She is one of a select group of Black prosecutors to be elected in the last several years pushing this same message.

NEWSY'S JAMAL ANDRESS: "When you look around at your Marilyn Mosbys, Kim Gardners, what do you make of the rise of not only progressive prosecutors, but specifically Black women in this position?"

FOXX: “You would see major cities like Baltimore, Boston, St. Louis, Chicago and think that we have arrived. We are but two dozen out of 2,400 people who do this work, and so there's much more work to do.”

Since taking office, Foxx has prosecuted far fewer cases than her predecessor, weeding out low-level offenses like shoplifting. A Chicago Tribune investigation found she dropped nearly 30% of felony charges in her first three years. She has also supported the county court’s significant reduction of cash bail and has overseen a major rise in electronic monitoring.

But her reformist attitude, coupled with a once-in-a-generation pandemic and stubborn gun violence, has made friends and foes alike question some of her decisions.

From 2019-2021, Chicago has seen a 50% rise in murders, with nearly 200 children killed this year. Some say Foxx’s reforms are contributing to the problem.

BROWN: “Too many violent repeat offenders are being released back into these communities, creating a sense of lawlessness and no consequences for their behavior.”

ANDRESS: “Why is it so difficult to keep people on board with that reform message that they may have voted for when crime starts to bubble up?

FOXX: “People are afraid and they want answers. They want something to hang their hat on. 'Because if we do this, then I can feel safe.' And the reality is, you know, we've been working on bail reform in Chicago since 2017. ... And every year from 2017 until the beginning of 2020, there was a reduction in violent crime. And that's not to say that bail reform reduced violent crime. What it does, though, say is that it didn't increase it.”

A Loyola University study found 97% of defendants released pre-trial were not charged with a new violent offense.

As a lifelong Chicago resident, Foxx says reducing violence is both a professional responsibility and a personal mission, recalling her childhood in the notorious Cabrini-Green housing project.

FOXX: “There are still children in neighborhoods who are growing up with rituals of survival that people in communities that are not impacted by gun violence will never understand. … I'm almost 50 years old, and I can clearly smell gunshot smoke. It doesn't leave you. And so I think when we talk about the crime, it’s not just the number of people who are shot. It's not just the person who was shot, who was hurt. It's their family. And it's the community.”