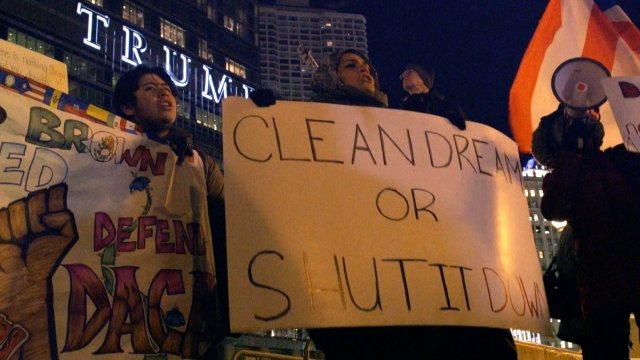 Chicago "Dreamers" rallied in freezing temperatures to call on politicians negotiating their fate for a deal without strings attached.

Hundreds of Chicagoans are braving freezing temperatures to show support for immigrants while politicians debate their fate. DACA recipients, also known as Dreamers, are here calling on Congress to give them a path to citizenship by passing what they call a "Clean DREAM Act." They call it "clean" because they don't want strings attached to the deal, such as funding for a border wall or increased security on that southern border.

"These kids have gone through extensive scrutinization, legal papers, processes," said Claudia Medina, one of the protest organizers. "Most of them are graduate students, college students, people who are working as professionals. And suddenly — they've grown up in this country — they're going to be deported?"

"I'm a DACA recipient, so it affects me personally because I'm still unsure of what's going to happen with my future," Veronica Nabor said.

"These are young people who were promised something by this country, and that promise should be upheld," added activist and protester Matthew Skoller.

Immigrants with Temporary Protected Status, or TPS, are also here asking Congress also to include them in the tentative DREAM Act.

"Many of the Central Americans that are here due to TPS have a very slight percentage of living when they go back home; they're still not safe," said Medina.

TPS is a program that gives immigrants from disaster-hit countries time-limited permission to work and live in the U.S. The White House recently said it will end the program for nearly 200,000 Salvadorans and almost 60,000 Haitians. It argues that El Salvador and Haiti have both sufficiently recovered from two different earthquakes that hit them years ago and can now accommodate the return of their citizens.

But many TPS holders have lived and worked in the U.S. legally for more than a decade and say they now deserve a path to citizenship.

DACA, or Deferred Action for Childhood Arrivals, protects from deportation about 800,000 immigrants who were brought to the U.S. as children. A federal judge recently blocked the Trump administration's order to rescind the Obama-era program. And the Department of Justice is now asking the Supreme Court to review that decision.