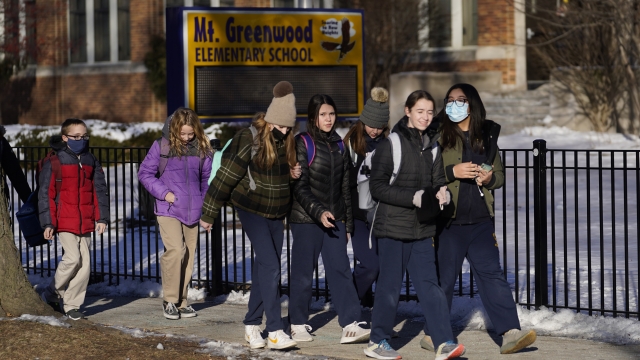 Chicago shares concerns with other districts nationwide, with more reverting to remote learning as infections soar and staff members are sidelined.

The standoff between Chicago school leaders and the teachers' union over COVID-19 safety protocols stretched into a second week as rhetoric between the two sides became nastier, schools began notifying families of more class cancellations and families' frustrations grew.

Chicago Teachers Union President Jesse Sharkey said the union and nation's third-largest school district remained "apart on a number of key features" that teachers want before returning to classrooms, including a testing program and triggers to close a school for in-person instruction due to an outbreak. He also accused Mayor Lori Lightfoot of refusing to compromise on teachers' main priorities and said union leadership can't go back to members with what the mayor's team has offered.

Lightfoot, who has opted for one-on-one interviews with news outlets to get out her message, accused teachers of "abandoning" students by refusing to teach in-person. She also shot back at the union president.

"If I had a dollar for every time some privileged, clouted white guy called me stupid, I'd be a bazillionaire," Lightfoot, who is Black, told WLS-TV.

Chicago shares pandemic concerns with other districts nationwide, with more reverting to remote learning as infections soar and staff members are sidelined. But the situation in union-friendly Chicago has been amplified in a labor dispute that's familiar to families in the mostly low-income Black and Latino district who saw disruptions during a similar safety protocol fight last year, a 2019 strike and a one-day work stoppage in 2016.

The union wants the option to revert to remote instruction across the roughly 350,000-student district, and most members have refused to teach in-person until there's an agreement, or the latest COVID-19 spike subsides. But Chicago leaders reject districtwide remote learning, saying it's detrimental to students and that schools are safe. Instead, Chicago opted to cancel classes just two days after students returned from winter break.

Parents and advocacy groups stepped up calls Monday for quicker action in the dispute where both sides have already submitted complaints to a state labor board.

A group of parents on the city's West Side — near the intersection of largely Black and Latino neighborhoods — demanded students get back to class immediately.

Cheri Warner, the mother of 15-year-old twins, said the sudden loss of in-person learning has taken a toll on her family.

One of her daughters has depression and anxiety, and winter is always difficult. Losing touch with her friends and teachers adds to that burden, Warner said.

The girls "missed their whole eighth grade year and it felt like they weren't really prepared for high school," Warner said. "They're all trying to figure out how to catch up and it's a really stressful situation."

Other parents said the district needs to do more

Angela Spencer, an organizer with the Kenwood Oakland Community Organization and a nurse, said she's concerned about her two kids' safety in schools. Spencer, who said she works as a nurse, said her kids' schools weren't adequately cleaned before the pandemic and she has "no confidence" in the district's protocols now.

At the same time, seven families, represented by the conservative Liberty Justice Center in Chicago, filed a lawsuit in Cook County over the closures, while more than 5,000 others have signed a petition urging a return to in-person instruction.

District officials, who call the union action "an illegal stoppage" have kept buildings open for student meal pickup and said that schools with enough staff can open their doors to students. Some teachers have shown up; district officials estimated about 15% of teachers did so Friday.

By Monday, it appeared that at least one school, Mount Greenwood Elementary, was able to open. Parents at the largely white school on the city's southwest side expressed relief.

City officials argue that schools are safe with protocols in place. School leaders have touted a $100 million safety plan, including air purifiers in each classroom. Roughly 91% of staff are vaccinated and masks are required indoors.

"I think people have this sense that like as soon as one person is in school with COVID, the entire classroom gets COVID or the entire school gets COVID," Arwady said. "It is just not what we see."

Since the start of the academic year, some classrooms have temporarily switched to remote instruction when there are infections. But in rejecting a wide-scale return to remote learning, city health officials argue most students directed to quarantine because of possible classroom exposure don't get COVID-19. The district is piloting a "test to stay" program to cut isolation times.

Union officials have argued the safety measures fall short amid record-breaking COVID-19 cases and the district has botched testing and a database tracking infections.