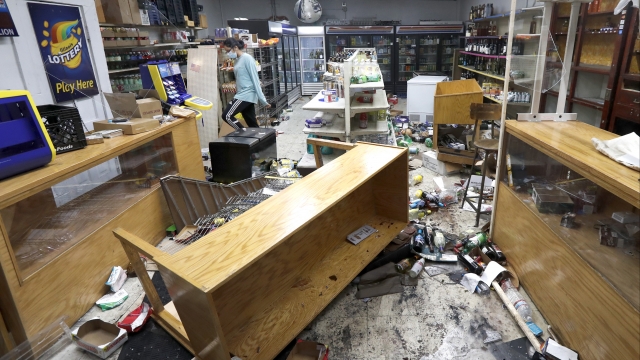 Chicago Police say an officer-involved shooting Sunday, followed by the spread of misinformation, contributed to mass looting in the city's downtown.

A combination of misinformation, police mistrust and angry reaction led to thousands of dollars in property damage by looters early Monday in Chicago — and a potential reckoning between the local state's attorney and the city's mayor.

"This was not legitimate First Amendment protected speech. These were not poor people engaged in petty theft to feed themselves and their families. This was straight-up felony criminal conduct," Chicago Mayor Lori Lightfoot said.

Hours before looting began in downtown Chicago, there was a shooting in the city's Englewood neighborhood. According to police, a 20-year-old fired at officers during a foot chase and was shot in the shoulder during the altercation.

"As this person was running away, a gun held by this person was pointed at our police officers who gave chase and this person fired shots at our officers. Officers returned fire and struck the individual who was taken to the University of Chicago hospital and is expected to survive," Superintendent David Brown of the Chicago Police Department said.

But following the shooting, a narrative emerged that a 15-year-old was shot and killed by police and that story spread on social media.  You can see social media posts claiming a suspect was shot 15 times, that he was unarmed, that police shot this person in the back while running away. According to police, none of this is true. But these reports set off the reaction that played out downtown.

"I don't care. I do not care whatever justification was given for this. There is no justification for criminal behavior ever," Lightfoot said.

Lightfoot is calling on the city as a whole to push for accountability for the incidents that unfolded overnight and in recent months. Specifically, she says she needs to see more accountability from those in the judicial system.

"And I call upon the state's attorney and our courts to make sure these individuals who were arrested and those to come are held accountable. Put your best people on this. We have made the case. We have the video. We have the officer testimony. These people need to be held accountable and not cycled through the system," Lightfoot said.

This request comes the same morning The Chicago Tribune published an analysis, claiming  that the state's attorney for the county, Kim Foxx, is dropping felony cases involving murder and other serious offenses at a higher rate than her predecessor. The analysis found that during Foxx's first three years on the job, “her office dropped charges against 29.9% of felony defendants.”

“We cannot conflate peaceful protesters with what we saw last night," Foxx said.

The Chicago Police Department says access to downtown will be restricted overnight in the coming days. Meanwhile, officers will patrol surrounding neighborhoods for any outbreaks of criminal activity stemming from what appears to have been an incident sparked by misinformation.