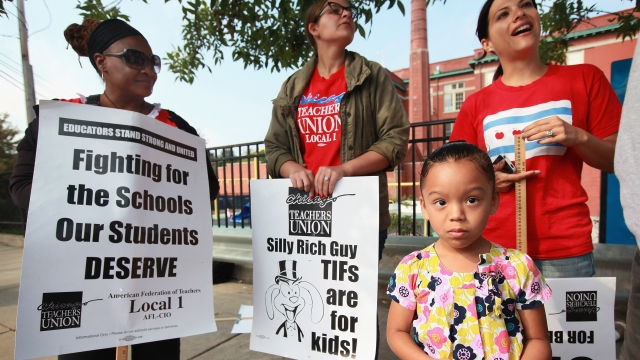 Chicago Teachers Union members and others are striking for a second day after being unable to reach an agreement with the city Thursday.

Students in Chicago remain out of school as the teachers strike heads into day two.

The Chicago Teachers Union said negotiations with city officials went on for 10 hours Thursday, but not enough progress was made to call off the strike.

The union’s chief of staff, Jennifer Johnson, told reporters Thursday, “It shouldn’t take 20,000 people in the streets to get a serious proposal. We are going to continue to bargain.”

Both sides have accused the other of not bringing serious proposals to the negotiation table in recent weeks.

Although classes are canceled, the district has kept schools open so students have someplace to go during the day. Library and parks district programs have also provided childcare options during the strike.

Chicago Mayor Lori Lightfoot said on Twitter Friday, “My primary concern is taking care of our children, and getting the word to CPS parents about the many places their children can go to get meals and, most importantly, be safe.”

Teachers unions throughout the country have voiced support for the strike and have pushed for the teachers' demands to be met. The Chicago Teachers Union is asking for smaller class sizes, additional support staffing and pay increases. The city has offered proposals that include added support for homeless students and a 16% raise over five years.

Numerous presidential candidates are voicing support for the strike. Joe Biden said on Twitter, “It’s time we support all workers with the pay and dignity they deserve.”

Julian Castro said on Twitter that his wife has been an educator for 16 years and that they are standing with the teachers and support staff as well.

Negotiations are expected to carry into the weekend if teachers and the city are unable to reach an agreement by the end of the day Friday.