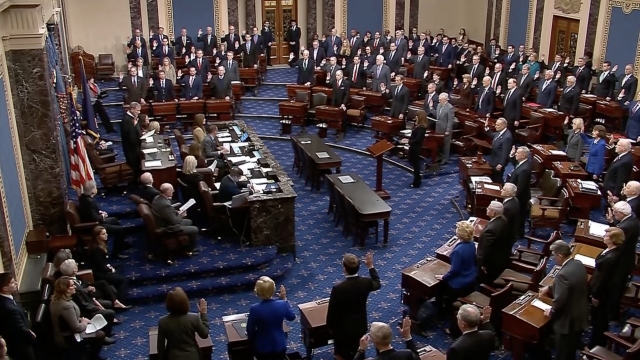 All but one senator took an oath to serve as jurors in President Trump's impeachment trial.

Chief Justice John Roberts swore in members of the Senate Thursday to serve as jurors in President Donald Trump's impeachment trial. Senators were called up in groups of four to sign the oath book. Roberts was also sworn in to preside over the trial.

All but one senator signed the oath book. Republican Sen. James Inhofe of Oklahoma was not at the Capitol due to a family emergency, but his office told Newsy he plans to be back when the full trial begins next week.

Earlier in the day, the seven House impeachment managers, led by Rep. Adam Schiff, walked from the House of Representatives to the Senate floor and formally introduced the two articles. Schiff read the articles — abuse of power and obstruction of Congress — aloud. The charges are related to President Trump withholding military aid for Ukraine in exchange for damaging information on his political rivals.

"It's a hoax," President Trump said. "It's a hoax, everybody knowns that. It's a complete hoax."

The president has denied any wrongdoing and has repeatedly said his phone call with Ukraine's president was "perfect."

Senate Minority Leader Chuck Schumer held a press conference after the swearing-in and said the feeling in the Senate chamber was "solemn, serious, profound."

"When the chief justice walked in, you could feel the weight of the moment," Schumer said. "I saw members of both sides of the aisle visibly gulp."

Senate Majority Leader Mitch McConnell said he expects to vote on rules for the proceedings on Tuesday. Arguments will start after that. McConnell has said his proposed rules would follow the precedent set during President Bill Clinton's impeachment.

President Trump is the third president to be impeached. It's now up to the Senate to decide whether President Trump should be removed from office. As it stands right now, it's very unlikely that will happen in the Republican-controlled Senate. A two-thirds majority vote is needed, so 20 Republican Senators, in addition to all 47 Democrats and Independents would have to vote to remove him from office.

The Senate trial is expected to last about two weeks, but if witnesses are called it could take longer. The Senate has adjourned and the trial will continue on Tuesday.