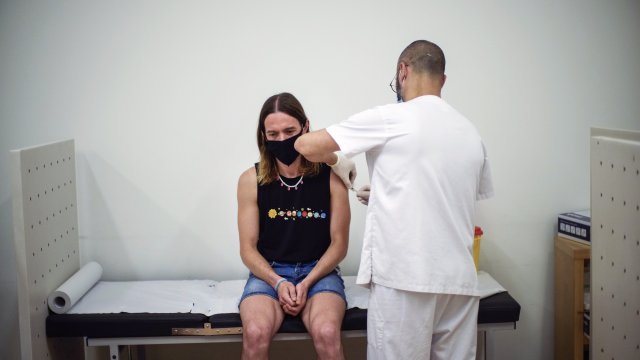 Three children in Georgia elementary schools have been diagnosed with monkeypox, according to the Georgia Department of Public Health.

Nationwide, the CDC reports 17 children ages 15 and under have been diagnosed with monkeypox in the U.S. However, health officials say the risk of monkeypox spreading in school-age children is small.

In New York City, health officials say parents and schools should be prepared with information about the virus, but they don’t think schools are a center of major transmission risk.

"I am taking precautions myself such as sanitizing, trying to stay out of large groups of people," said Willa Coleman, freshman at the University of Kentucky.

Universities are also on alert against the spread of the virus.

"I think it’s important for college students to realize that the risk is low but not zero, and it’s largely dependent on your behavior and activities," said Dr. Thomas Russo, chief of the division of infectious disease at the University of Buffalo.

At least five universities have confirmed cases of the virus among students: Washington, D.C. schools Georgetown University and George Washington University, the University of Texas at Austin, and Bucknell and West Chester Universities in Pennsylvania.

"You should be very suspicious of any fever, flu-like illness or rashes that you develop anywhere on your body, and get those investigated," said Eric Cioe-Pena, director of global heath for Northwell Health.

Health experts hope to end the stigma in the gay community by emphasizing anyone can get infected.

"There's nothing about monkeypox that makes it more likely to occur in men who have sex with men," Cioe-Pena said. "It just happens to be circulating right now in a social circle of men who have sex with men because that's where the index case started, and that's just bad luck. So, there really is nothing about the lifestyles or habits of that community that make them more at risk."

Overall though, the World Health Organization says the number of monkeypox cases globally has dropped by 21% in the last week, reversing a month-long trend of rising infections.