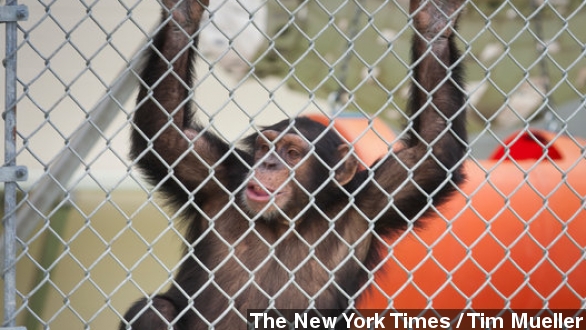 The Nonhuman Rights Project is filing writs of habeas corpus on behalf of four captive chimpanzees in New York.

Four captive chimpanzees in New York could soon have their day in court — to determine whether they'll be legally recognized as people.

The lawsuit filed by the Nonhuman Rights Project alleges a 26-year-old chimpanzee named Tommy "is being held captive in a cage in a shed at a used trailer lot."

Tommy's owner, Patrick Lavery, tells USA Today the chimp is one of 11 he's rescued from bad situations and housed temporarily while waiting to find a sanctuary. He also said Tommy's cage "exceeds federal and state standards and is inspected every year."

Tommy is the first of four chimpanzees who'll have a lawsuit filed on his behalf by the Nonhuman Rights Project this week. But why?

The online news editor for the journal Science explains the suit aims to first free the chimpanzees from captivity — then place them in a Florida sanctuary.

The article says the Nonhuman Rights Project researched its legal strategy for five years. The plan? Petition judges with writs of habeas corpus, which allow those in captivity to have a say in court. (Via PBS)

The choice of jurisdiction was also a strategic one — because New York allows automatic appeals of adverse habeas corpus decisions. (Via YouTube / YaleUniversity)

The effort is headed up by animal rights activist Steven Wise, who tells The Huffington Post it would require future litigation to spell out chimpanzees' rights post-captivity. (Via Flickr / foshie)

A writer for io9 suggests this is just the start, "Poised to be the first of many — including cases to defend the rights of gorillas, orangutans, elephants, whales, and dolphins."

The New York Times notes the personhood lawsuit would be the third major development involving chimpanzees in 2013.

Earlier this year, the National Institutes of Health moved to retire most research chimps. And the U.S. Fish and Wildlife Service proposed declaring chimpanzees an endangered species.