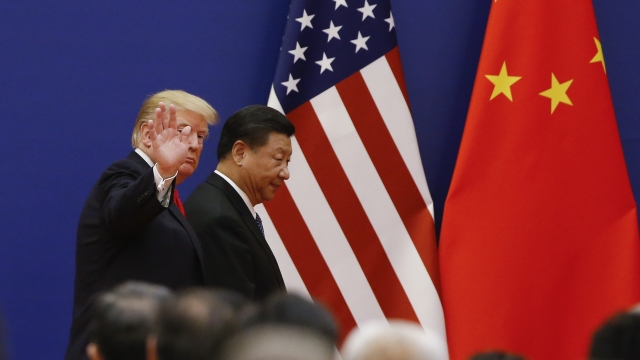 The tariffs are on $75 billion worth of U.S. imports.

China has placed retaliatory tariffs on $75 billion worth of U.S. imports.

China's Finance Ministry made the announcement Friday. The rates range from 5% to 10% and are set to go into effect in two phases, on Sept. 1 and Dec. 15. The country also issued a 25% tariff on cars and a 5% tariff on vehicle parts and crude oil.

The ministry said "China was forced to take countermeasures" after the U.S. imposed its recent tariffs. President Donald Trump announced a 10% tariff on the remaining $300 billion in Chinese imports earlier this month.

China warned the U.S. earlier this week that the tariffs were coming, and its Foreign Ministry called on the U.S. to meet it "halfway" in their trade negotiations.

The last time delegates from the two countries met for trade negotiations was in July, and the talks ended abruptly without a deal.

U.S. and Chinese officials are expected to resume negotiations in September — though it's unclear if they'll be able to come to an agreement. President Trump says he plans to respond to these latest tariffs Friday afternoon.