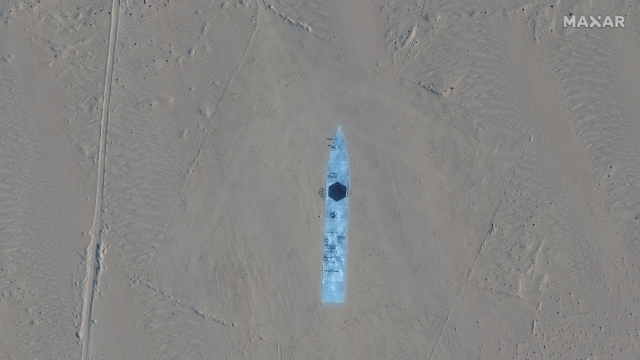 Fears of escalations between the U.S. and China have risen with tensions in Taiwan, the South China Sea, and the Indo-Pacific.

Above the Taklamakan Desert, nicknamed the "Sea of Death," satellite images show China has constructed mock-ups of a U.S. aircraft carrier and warships.

"We have to assume that China wanted us to see these mock-ups in the desert. They know all about our satellites and their capabilities. And so they knew that these models would be found sooner or later and that we would understand them," said Robert Daly, director of the Kissinger Institute on China and the United States. "So it isn't really that we have cleverly figured out China's secret. For China, this too, the discovery of these models is an aspect of deterrence and is seen by Beijing as a warning to the United States. They want us to know what they're practicing for."

According to the U.S. Naval Institute, China's first structure for a mock-up American aircraft carrier was built in 2019. The targeting site is near a range that tested so-called "carrier killer" missiles to destroy carriers, often seen as the Navy's crown jewels.

China is reported to have practiced sinking one in the desert back in 2013. The U.S. also sinks its own ships at the world's largest maritime warfare exercise in its own show of force.

But fears of escalations between the U.S. and China have risen with tensions in Taiwan, the South China Sea, and the Indo-Pacific.

An annual Pentagon report says China's military is steadily expanding its presence, arsenal, and ambition and that last year, "the PRC fired anti-ship ballistic missiles against a moving target in the South China Sea, but has not acknowledged doing so."

"Building models for target practice is not new," Daly said. "China used to do it just by pouring ship-shaped slabs of concrete. Now it is making them mobile and they're far more detailed. And so there may be elements of these detailed models that intelligent Chinese missiles can focus in on, but it's within the range of expected activities."

China's Foreign Ministry spokesperson said he was, quote, "not aware of the situation." A spokesperson for the Defense Minister called the Pentagon report "fabricated" and "fraught with bias."