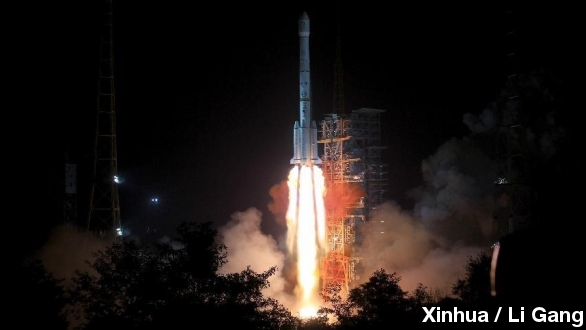 China successfully launched its first lunar lander and rover on a three-month mission to the moon.

China's space program hit another milestone over the weekend after it launched a rocket to the moon carrying the country's first lunar rover.

The Long March 3B rocket successfully blasted off from the Xichang launch pad at 1:30 a.m. Monday local time. The rocket is scheduled to drop off China's moon probe Dec. 14. (Via BBC)

The Chang'e 3 lunar lander, along with the Yutu or "Jade Rabbit" rover, are expected to touch down in the moon's Bay of Rainbows crater. The Jade Rabbit will study the moon's rocks and soil for three months. (Via CCTV)

A spokesman for the China National Space Agency told reporters the mission would be an important chance for China's space program to show what it's capable of.

"The three objectives are: to manage to soft land a craft on the moon, to inspect and probe the lunar surface, and to be able to control and communicate with the craft during the mission." (Via Al Jazeera)

China has managed to land spacecraft on the moon before, most recently in 2009, but only in "hard" crash landings. A "soft" lunar landing which allows the craft to freely operate afterward has only ever been accomplished by the U.S. and the former Soviet Union. (Via The New York Times)

And this mission might just be the beginning of China's lunar ambitions.

Former Apollo astronauts Buzz Aldrin and Eugene Cernan told Aerospace America China could put a human on the moon in 15-20 years. That's something no other country has accomplished since America's Apollo missions wrapped up in 1972.

China's lunar craft, Chang'e and Yutu, take their names from a Chinese moon goddess and her rabbit companion. The names were chosen via an online poll.