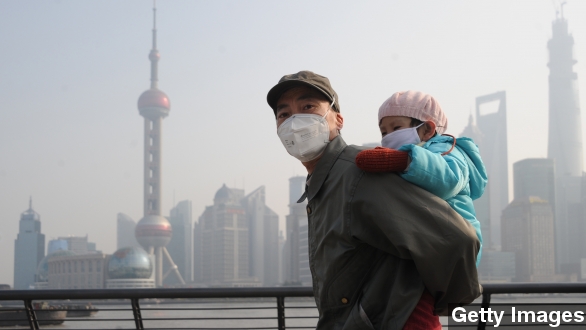 China has announced plans to try to grow in a green way as the country attempts to balance cutting carbon emissions with continuing growth.

China has announced its latest plan to go green through its all-important financial sector — one of its biggest climate announcements since this month's environmental agreement with the U.S. put the spotlight on the country's climate strategy.

The People's Bank of China Deputy Gov. Pan Gongsheng said on Wednesday the country will try to foster the growth of green industries and businesses. (Video via Hong Kong Economic Times)

Bloomberg reports in addition to that announcement, a top climate official in China said the country plans to start the nationwide trade in carbon permits within two years.

These two announcements come in light of the biggest climate announcement China has made, at least in the context of U.S. relations, which hit earlier this month.

That agreement would have the U.S. and China making big changes to reduce emissions: the U.S. doubling the pace of emission reduction, and China pushing for less reliance on fossil fuels.

President Obama said, "I commend President Xi, his team and the Chinese government for the commitment they are making to slow, peak and then reverse the pace of China's carbon emissions."

Republicans criticized that deal, saying the U.S. had to do too much and China too little.

Sen. John Barrasso said, "To me this is an agreement that's terrible for the United States and terrific for the Chinese government and the politicians there."

That's not a new stance for many Republicans, who have over the years pointed to China's inaction on climate change to argue even if the U.S. did substantially cut emissions, it wouldn't outweigh China's.

In a supercut of Republicans taking that stance, John Boehner said, "We can't do it alone as one nation."

"If we've got India, China and other industrialized countries not working with us, all we're going to do is ship millions of jobs overseas," said Boehner.

Still, Wednesday's announcement came after another announcement a week earlier that would cap China's coal consumption by 2020 and set a limit of 62 percent of the country's energy from coal.

This video includes an image from Getty Images and music from Broke For Free / CC BY 3.0.