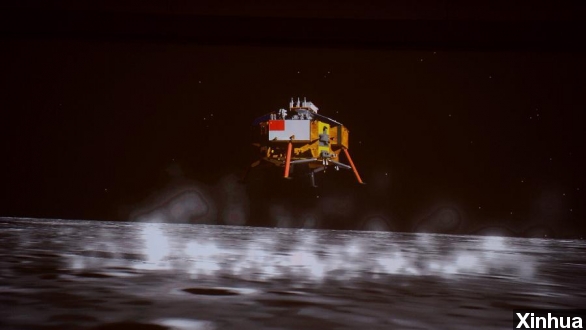 China became the first country to make a "soft landing" of a spacecraft in almost 40 years. The last country to do so was the Soviet Union in 1976.

For the first time in nearly four decades, a space probe made a soft landing on the moon — that's according to Chinese state news agencies.

China launched an unmanned rocket carrying a lunar rover almost two weeks ago. Saturday's reported landing makes China the third country to make a lunar landing behind the U.S. and the Soviet Union. (Via CCTV)

The New York Times reports the Soviet Union sent the last probe to the moon without crash-landing back in 1976.

The Chinese rover safely touched down on a flat plain known as the Bay of Rainbows. According to the BBC, China sent its own rover to carry out scientific experiments and to try to find any type of natural resources over the next few months.

This accomplishment is welcome news for a space program that's still in its infancy.

CNN notes China sent its first astronaut into space just in 2003. This mission means an entirely new phase of space exploration for China.

China reportedly plans to send another similar rover to the moon by 2020 with the hope of bringing back rock samples to Earth. The BBC reports this could put China on track to put a manned crew on the moon during the 2020s.

Correction: A previous version of this video incorrectly stated the number of years since the first manned U.S. moon landing, which occurred 44 years ago. The video has been updated.