China May Have Doubled Its Troop Presence In Hong Kong 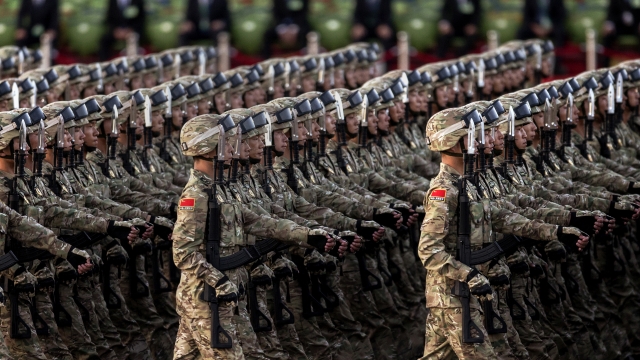 Multiple foreign envoys told Reuters there are now as many as 12,000 Chinese troops stationed at the Hong Kong garrison.

As protesters and police continue to clash in Hong Kong, multiple foreign envoys say China is ramping up its military presence in the city.

In late August, China was spotted moving troops into the Hong Kong garrison. State media said the rotation was an "annual normal routine."

But seven envoys now tell Reuters that so-called rotation would probably be better described as a "reinforcement." The sources estimated there are now as many as 12,000 troops stationed at the garrison — that's more than double the 5,000 troops they said were stationed there before the August move.

Even though Hong Kong is semi-autonomous, China's maintained a military presence there since 1997 — that's when the former British colony was handed back to China.

That military presence has always been members of the People's Liberation Army. But multiple diplomats told Reuters that part of the People's Armed Police — or the PAP — is also now at the Hong Kong garrison. That group is essentially China's internal security force. The International Institute for Strategic Studies says the PAP is also responsible for supporting China's military "in times of war."

Anti-government demonstrators have been protesting in Hong Kong for months, and China has yet to take direct action.

That's because its military cannot get involved in the protests until it gets permission from the Hong Kong government. There is a workaround to this constitutional requirement — China could instead unilaterally declare a state of emergency in Hong Kong, allowing it to take control of the city.

Chinese government officials have said they haven't ruled out using that second option. But analysts believe it would be a risky move that could undermine the civil rights guaranteed to Hong Kong under the "one country, two systems" model.