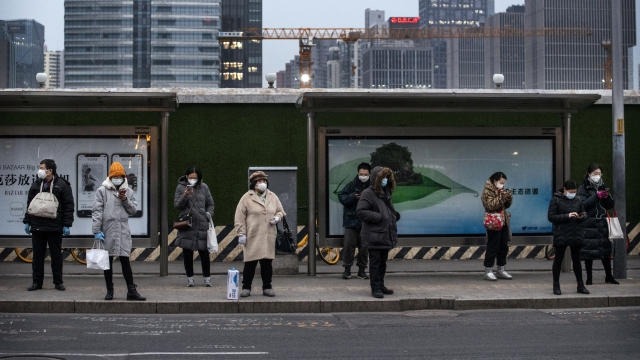 More than 2,600 coronavirus-related deaths have been reported in China, and the virus has sickened more than 77,000 people.

China has chosen to postpone a major annual parliamentary meeting because of the coronavirus outbreak.

The 10-day summit, known as the "Two Sessions," is the most important political meeting of the year in China. It was originally scheduled to start March 5, and this will be the first time in decades that it is not held the first week of March. A new date has not been released yet.

More than 2,600 coronavirus-related deaths have been reported in China, and the virus has sickened more than 77,000 people there. The virus was first discovered in Wuhan, China, which has been placed under lockdown. Since then, the coronavirus has spread to dozens of countries.

Over the weekend, northern Italy saw a sudden spike in reported cases; it counted at least 229 as of Monday. At least six people there have died. An Italian official said the jump does not mean the virus is spreading, it just means existing cases are being identified.

South Korea also saw a spike in cases and raised its national alert level for the virus to the "highest level."

The CDC says least 53 people have tested positive in the U.S., including 36 people who were on the Diamond Princess cruise ship.

The World Health Organization has declared the outbreak a global health emergency. But on Monday, health officials said it's too early to declare the coronavirus outbreak a pandemic.