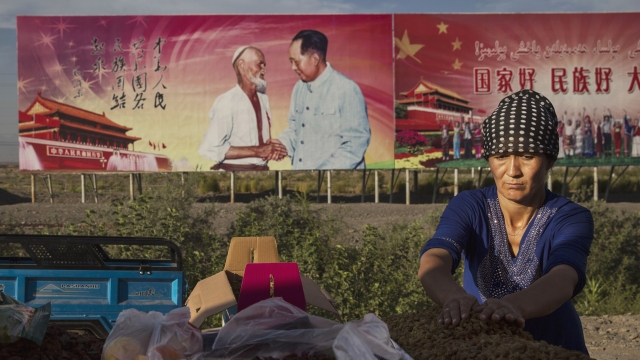 The U.N. says as many as 1 million ethnic Uighurs and other Muslim minorities from northwestern China are being held in government detention.

The northwest China region of Xinjiang is home to 21 million people, including 12 million ethnic Uighur Muslims. Since 2017, the United Nations says as many one in 12 Uighurs and other Muslim minorities have been forced into Chinese "re-education" camps.

The Chinese government insists the camps are humane, saying they provide vocational education, Mandarin instruction and teaching that counters extremist rhetoric and terrorism.

But David Stillwell, the state department's assistant secretary for East Asia Affairs says that claim is false. He says the camps are central to a government "repression campaign" of "intense political indoctrination and forced labor."

“According to U.S. estimates and and those of independent organizations, China has detained more than one million individuals in internment camps since April, 2017. Individuals are detained arbitrarily for simple expressions of cultural and religious identity. For example, possessing books on Islam and Uighur culture, reciting a Koran at or a funeral or even wearing religious attire.”

With the treatment of the Uighurs drawing international concern, the Trump administration took action Tuesday. It barred eight Chinese companies and 20 state agencies from doing business with U.S. firms in sanctions over surveillance activities targeting Uighur and Muslim minorities.

China's hostility toward the Uighurs has a long history. The community briefly had an independent state in 1933. Later the government reasserted control with the 1949 Communist Revolution and aggressively populated the region with majority Han Chinese.

Tensions flare to this day. China blamed bombings and knife attacks at markets and train stations in 2014 on Uighur extremists and stepped up a government crackdown.

The Uighurs are generally banned from traveling outside China - and often even inside the country. Nury Turkel, chairman of the Uyghur Human Rights Project, charges that the government is trying to scrub their identity from Chinese society.

“The Chinese government's intention is very clear. They want to deprogram the Uighurs' essentially whole ethno-national identity and erase their religion, their language, their tradition, their art and culture and - most importantly - their way of life.”

China only recently acknowledged the Uighur detention facilities' existence when the governor of Xinjiang in March described them as "boarding schools." In June, he said, most residents were returned to society with "satisfactory jobs and good incomes."

The U.N. and other international groups dispute that. In the words of Human Rights Watch, China "is wrong to think it can escape international scrutiny."