China Claims It Released A Majority Of Its Detained Muslims 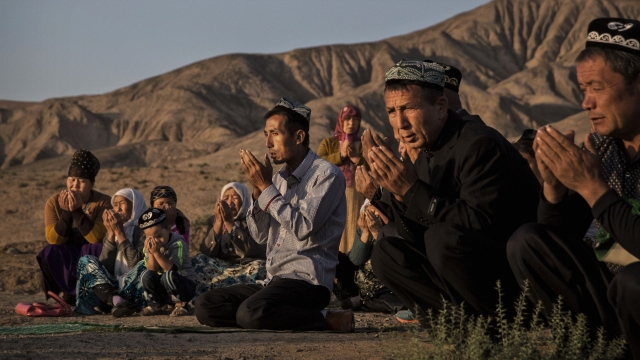 China says most of the people are back in society and reunited with their families. But the U.S. is skeptical.

China announced it has released a majority of Muslim detainees from their so-called "re-education" or "vocational training" camps. But U.S. officials are skeptical that that's true.

On Tuesday, one of China's top officials said in an announcement that an unspecified number of people are back in society and reunited with their families. China has been heavily criticized for its detention of Uighurs and other Muslim minorities in the western Xinjiang region. Human rights organizations around the world say China spies on the Uighurs, and have reportedly detained 1 million people. Multiple international news outlets have reported that people are put into labor camps, tortured and forced to renounce their faith.

But China says it's part of a crackdown on extremism, terrorism and a way to help others get their families out of poverty.

The U.S. State Department said it's "unable to verify the vague claims made by senior Chinese officials regarding the release of those arbitrarily detained," and has called on China to allow the United Nations High Commissioner for Human Rights "unhindered and unmonitored access" into the camps to investigate. The department says, "China's repressive campaign in Xinjiang follows a long history of religious, linguistic, and cultural oppression."

The World Uyghur Congress also disputed China's announcement and urged "the international community to remain deeply skeptical of these statements, given China’s history of false claims about the internment camp system."