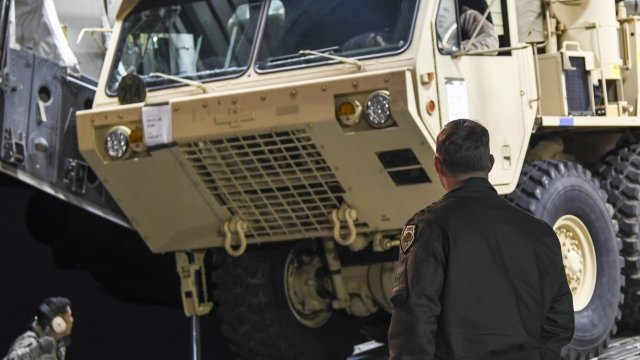 China views the THAAD system as a threat, even though South Korea has repeatedly said the system is purely defensive.

China agreed to ease tensions with a U.S. ally in the face of North Korea's saber-rattling.

That led to economic retaliation from China, which views the THAAD system as a threat. South Korean businesses were boycotted, tourism decreased and economic growth lagged.

On Tuesday, Seoul and Beijing agreed to normalize relations "as soon as possible."

China's president, Xi Jinping, is in a stronger position to act on this issue, having consolidated his domestic power earlier this month. And South Korean President Moon Jae-in took steps to ease Chinese fears over the THAAD system. An official said the South Korean government wouldn't seek more THAAD deployments.

President Donald Trump's trip to Asia is only a few days away, and the North Korea issue is sure to follow him at each stop.

According to the BBC, Abe promised during a press conference that his coalition would "dramatically show countermeasures" against Pyongyang.

To be clear, China still isn't happy about the THAAD system being so close to its borders.

But South Korea has repeatedly said the THAAD system is purely defensive. Officials said South Korea wouldn't enter a military alliance with the U.S. and Japan, a reassurance that China's influence in the region wouldn't be challenged.