China To Allow More Parents To Have Two Children 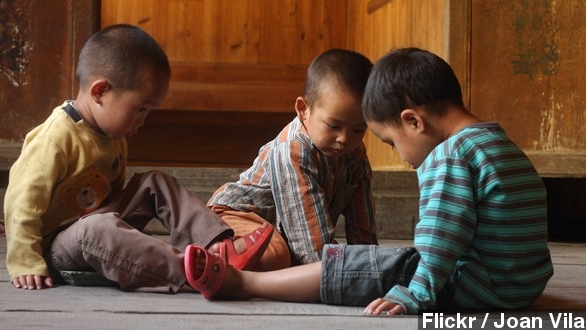 Officials say parents who are themselves only children will be allowed more than one child, saying the country has achieved its low birth rate goals.

China's controversial one-child policy will be revised in the New Year, allowing more parents to have up to two children.

Chinese state-run news agency Xinhua reports parents will now be able to have two children if one of the parents is an only child. Li Bin, minister in charge of the National Health and Family Planning Commission, said, "It is the right time to make changes. The low birth rate is stable, the working population [is] still large and the burden of supporting the elderly remains relatively light."

Changes to the one-child policy were announced last month and the official revision is expected to take place early next year.

Originally implemented back in 1979 to control China's booming population, the method, in some cases, has caused more problems than solutions.

According to Xinhua, it's resulted in substantial fines that debilitate already-poor families. It's also caused a huge rift in demographics, resulting in one-fourth, or 400 million, of the Chinese population being over the age of 60 by 2030. The elderly population is reportedly one-seventh of the population right now . (Via Voice of America, YouTube / Journeyman Pictures)

It's also resulted in a surge of forced abortions and some voluntary ones of many female babies — since males are believed to have a better chance of holding powerful, lucrative job positions. But, that means, by 2020, an estimated 24 million Chinese men won't be able to find a female partner. (Via NTDTV, Daily Mail)

According to The Wall Street Journal, the one-child policy has prevented an estimated 400 million births since 1980.