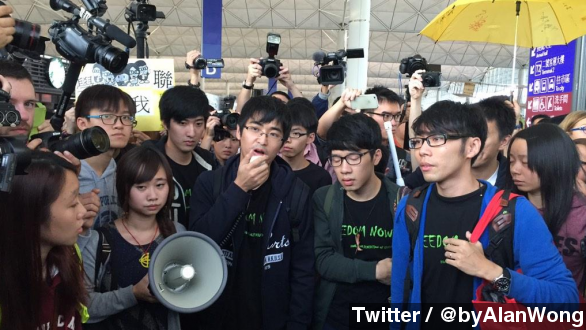 After almost seven weeks of protests in Hong Kong, student leaders attempted to fly to Beijing but were denied boarding on their flight.

Pro-democracy protests in Hong Kong calling for the government to allow free elections have been going on for almost seven weeks now, and only once have both sides formally met to negotiate any terms.

Frustrated, leaders of the so-called “Umbrella Movement” hoped to bypass the Hong Kong government by taking their case to Beijing on Saturday. But they were denied boarding at the Hong Kong International airport.

According to the South China Morning Post, Alex Chow and two other representatives, all part of the student group that's organizing the protests, had their home-return permits revoked — preventing them from traveling to mainland China. (Video via Ming Pao)

The New York Times noted a fervent crowd welcoming the supporters as they arrived at the airport and quotes Chow as saying protesters had "exhausted all available channels" for reaching their demands.

Time says the move by the protest leaders was seen as something of a last ditch effort with the increased possibility the Hong Kong government may start enforcing injunctions against the protesters.

But, the boarding denial from Beijing was also expected. Chow had said earlier in the week that if they were denied entry, Beijing’s Chinese Communist Party would be “telling the world that they are afraid of listening to the Hong Kong people.” (Video via NTDTV)

From the start, the trip was considered risky for Chow and the others as they faced the possibility of arrest and imprisonment in the Chinese capital.

Since the beginning of the protests, China's official stance has simply been that they were illegal.

The worry in China is if it gives any concessions to the Hong Kong protestors, then it may stir democratic aspirations for its own people on the mainland.

Earlier this week China doubled up on its stance with President Xi Jinping himself declaring the protests illegal, marking one of the strongest showings of Chinese disapproval of the movement so far.