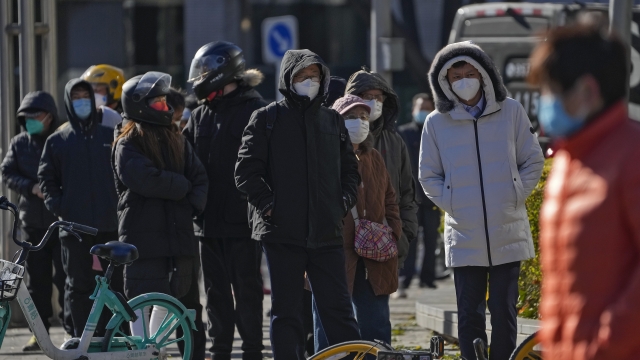 China’s ruling Communist Party has vowed to “resolutely crack down on infiltration and sabotage activities by hostile forces,” following the largest street demonstrations in decades staged by citizens fed up with strict anti-virus restrictions.

The statement from the Central Political and Legal Affairs Commission released late Tuesday comes amid a massive show of force by security services to deter a recurrence of the protests that broke out over the weekend in Beijing, Shanghai, Guangzhou and several other cities.

Crowd Angered By Lockdowns Calls For China's Xi To Step Down

The protests are the most widespread show of opposition to the ruling party in decades.

While it did not directly address the protests, the statement serves as a reminder of the party’s determination to enforce its rule.

Hundreds of SUVs, vans and armored vehicles with flashing lights were parked along city streets Wednesday while police and paramilitary forces conducted random ID checks and searched people’s mobile phones for photos, banned apps or other potential evidence that they had taken part in the demonstrations.

The number of people who have been detained at the demonstrations and in follow-up police actions is not known.

While reports and footage of the protests have flourished online before being scrubbed by government censors, they have been ignored entirely by the strictly controlled state media.

Further diverting attention was Wednesday evening's national news dominated by the death of former president and Communist Party leader Jiang Zemin at the age of 96.

Jiang was installed as leader just ahead of the bloody suppression of the 1989 student-led pro-democracy movement centered on Beijing's Tiananmen Square, and later presided over an era of breakneck economic growth during the 1990s and early 2000s while still maintaining rigid party control.

The commission's statement, issued after an expanded session Monday presided over by its head Chen Wenqing, a member of the party's 24-member Politburo, said the meeting aimed to review the outcomes of October's 20th party congress.

At that event, Xi granted himself a third five-year term as secretary general, potentially making him China's leader for life, while stacking key bodies with loyalists and eliminating opposing voices.

Doctors Worry For COVID Effects On Seniors, Particularly In China

In a new briefing, health officials urged older adults in China to get a COVID vaccine and addressed lockdowns that are sparking protests.

“The meeting emphasized that political and legal organs must take effective measures to … resolutely safeguard national security and social stability," the statement said.

Yet, less than a month after seemingly ensuring his political future and unrivaled dominance, Xi, who has signaled he favors regime stability above all, is facing his biggest public challenge yet.

He and the party have yet to directly address the unrest, which spread to college campuses and the semi-autonomous southern city of Hong Kong, as well as sparking sympathy protests abroad.

Most protesters focused their ire on the “zero-COVID" policy that has placed millions under lockdown and quarantine, limiting their access to food and medicine while ravaging the economy and severely restricting travel. Many mocked the government's ever-changing line of reasoning, as well as claims that “hostile outside foreign forces" were stirring the wave of anger.

Yet bolder voices called for greater freedom and democracy and for Xi, China's most powerful leader in decades, as well as the party he leads, to step down — speech considered subversive and punishable with lengthy prison terms. Some held up blank pieces of white paper to demonstrate their lack of free speech rights.

The weekend protests were sparked by anger over the deaths of at least 10 people in a fire on Nov. 24 in China’s far west that prompted angry questions online about whether firefighters or victims trying to escape were blocked by anti-virus controls.

Authorities eased some controls and announced a new push to vaccinate vulnerable groups after the demonstrations, but maintained they would stick to the “zero-COVID” strategy.

“Zero COVID” has helped keep case numbers lower than those of the United States and other major countries, but global health experts including the head of the World Health Organization increasingly say it is unsustainable. China dismissed the remarks as irresponsible.