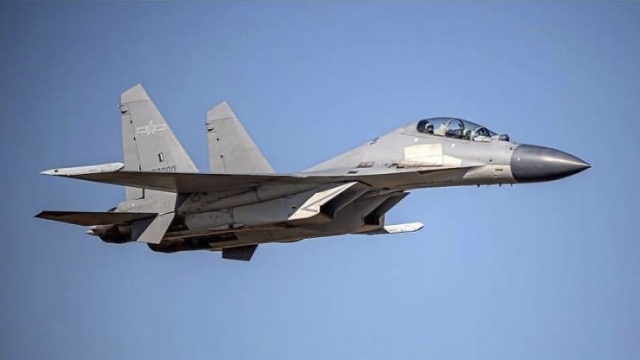 Chinese tourists are showing up to beaches across from Taiwan to watch Chinese military drills, which are getting more serious.

China's live-fire military drills are now in full force around Taiwan, and there are signs they're escalating.

On Friday, Beijing sent more warships and aircraft into waters and airspace near Taiwan.

According to China's Xinhua news agency, more than 100 planes and 10 vessels have participated in exercises so far.

It's a major flex of military muscle in the face of international criticism.

"I think that that they made a big fuss because I'm speaker, I guess," said House Speaker, Nancy Pelosi.

All of it is sparked by U.S. House Speaker Nancy Pelosi's trip this week to Taiwan. It's the highest ranking U.S. official to visit in 25 years.

"The fact is, the speaker's visit was peaceful. There is no justification for this extreme, disproportionate and escalatory military response," said Antony Blinken, U.S. Secretary of State.

Earlier this week, China's military laid out exactly where these drills would take place.

Several swaths of sea, encroached areas that Taiwan has marked as its territory.

Those claims are not recognized by China, which claims sovereignty over Taiwan.

This confident display of defiance from Beijing is stoking worldwide fears of an imminent military confrontation.

But on the Chinese mainland, citizens appear to be encouraging the aggression. Tourists are flocking to the coast, hoping to catch a glimpse of the exercises.

"People got emotional at the beginning because Nancy Pelosi was allowed to visit Taiwan just like that. However, later we crossed the so-call middle line of the Taiwan Strait with military exercises and yesterday our missiles flew over Taiwan, which made us feel our motherland is very powerful and gave us confidence that the return of Taiwan is the irresistible trend," said Wang Lu, a tourist from Zhejiang.

In the meantime, Beijing is retaliating against the United States.

Beijing says it's halting cooperation on issues ranging from climate change and cracking down on international crime.

But so far, economic and trade talks are still intact as China looks to President Joe Biden to lift tariffs on Chinese imports imposed by Donald Trump.

"They may try to keep Taiwan from visiting or participating in other places, but they will not isolate Taiwan by preventing us to travel there," Pelosi said.