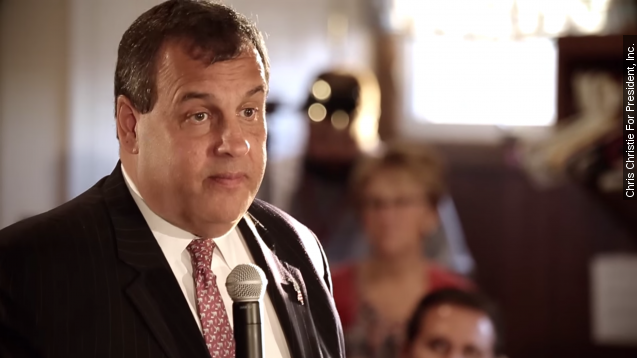 “We need to have strength and decision making and authority back in the Oval Office and that is why today I am proud to announce my candidacy for the Republican Nomination for President of the United States of America,” said New Jersey Gov. Chris Christie.

“Every morning I wake up with an opportunity to do something great. That’s why this job is a great job, and that’s why President of the United States is an even greater job for a greater number of people,” said Christie.

That was preceded by a video Sunday night, where Christie followed the format for GOP presidential candidates so far: putting out, what is by all measures, a campaign video before officially announcing his run — whatever that means these days. (Video via Chris Christie For President, Inc.)

If you're keeping count, Christie will be the 14th Republican candidate running for president, following hot on the heels of Louisiana Gov. Bobby Jindal, who announced last week.

And while Jindal was accused of even talking to his kids like a politician in his — let's say unique — announcement video, Christie wants to make sure people know he won't be self-censoring. (Video via Jindal For President)

Still, when it comes to talking to the press, Christie faces accusations of doing the opposite and just not talking at all, like here with MSNBC.

"Is there something you didn't understand about 'no questions'?" Christie asked.

And Christie, like Jindal, has drawn the scorn of voters in his state, with a Monmouth University poll finding in May 56 percent of registered voters disapprove of his job as governor.

That same poll found most New Jerseyans believe Christie was involved in the scandalous decision to close lanes on the George Washington Bridge, something Christie has denied. (Video via WCBS)

Now Christie will set out to convince not just his home state, but the nation, that he’s the best choice in a pack of 2016 presidential candidates with no clear front-runner. (Video via Office of Gov. Chris Christie)