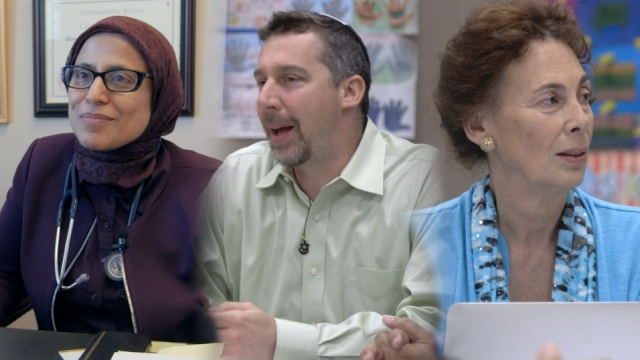 An interfaith group made up of a mosque, synagogue and church based out of Oakville, Ontario, united to support a Syrian refugee family.

A mosque, a synagogue and a church all united to support a Syrian refugee family. The Canadian interfaith group is called ACT.

"ACT, Abraham's Children Together, is a group of Muslims, Christians and Jews coming together specifically to help refugees from Syria come to Canada," said Rabbi Stephen Wise.

"So basically about 18 months ago, I called up my friend Morar, who happens to be a minister in the United Church, and my friend Stephen, who's a rabbi at the synagogue, and I said, 'Look, guys; let's have breakfast together and talk about the Syrian crisis,'" said Dr. Aliya Khan.

"It came together, I think, based on the friendships and trust that had developed amongst the members of the different faiths," said Rabbi Wise.

ACT pooled its congregations' resources to support the Al-Balkhis — a family of seven.

"This is the first I've heard about three different cultures, or religions, just to help the Syrians. … So then they found this house for us, and we moved here, and all of the furniture here is also provided from them."

Over the course of a year, the Al-Balkhis will transition toward independence.

ACT is just one of the many thousands of private sponsors that have taken in Syrian refugees alongside Canada's government.