To Open Or Not? COVID-19's Physical And Financial Blow To Churches 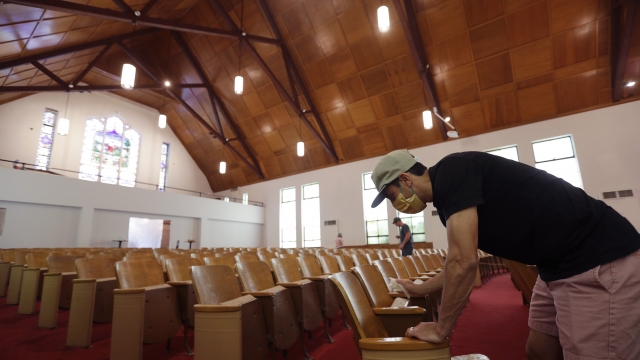 As stay-at-home orders are lifted, churches are grappling with a tough choice: to open or remain closed.

Across the country a storm is brewing, with churches that say banning large gatherings due to COVID-19 violates their constitutional rights.

On the flipside, when leaders of the North Atlanta Church of Christ heard from government officials the first COVID-19 outbreaks in Georgia happened inside churches, they made the choice to close.

“That's all we needed to hear. Because if we are going to love our neighbors, well, you know, and love each other like Christ loves us, we’re not going to do anything that would inadvertently risk someone else's well being. “

The pews have been empty for weeks; worship services moved online.

As stay-at-home orders begin to lift across the country, some churches are welcoming it. Others are grappling with a tough choice: to open or remain closed.

The state of Georgia issued best practices for religious organizations: "Keeping 6 feet apart on all sides, wearing masks and refraining from using items touched by multiple people, like collection plates."

Minister Don McLaughlin says it’s one thing on paper, another to put it into action. He says they are considering starting reentry with small groups. But the inclusive and diverse nature of the church means considering each individual member.

“People had on a lot of different thoughts and feelings about the health part of it, the economic part of it, the social part of it. And you begin to realize, I would not have thought of it that way.”

The health discussion is a concern everywhere, particularly among African Americans, who have been disproportionately affected by the virus.

The Church of God in Christ, the nation’s largest predominantly black denomination, has lost at least 12 bishops, several pastors and congregants to COVID-19.

“Some of our pastors have gotten sick and died because they have gone to help people that were in trouble.”

“With HIV disproportionately in the same communities in which we serve, and then many other things that are happening, and those churches were serving people that were already hugely vulnerable, and now having to isolate themselves.”

In addition to the loss of life, the financial strain has also been difficult, particularly for older and inner-city churches with members who can’t connect online for worship or donate virtually.

“No. 1, you have people who were getting laid off. No. 2, you had a lot of folks have older congregations who just can't give online.”

“We come at this both as Christians who are deeply involved in the church, but also people who have been involved in government. Churches are often the most trusted institution in communities. It's where folks can often get food where they can't, when they can't get it anywhere else. It's often where people can get job training.”

“When it comes to federal advice, I asked the surgeon general, Dr. Jerome Adams, what he thought about religious organizations who plan to gather this weekend, particularly those made up of African Americans.”

"I've met with thousands of church leaders to help them understand the the dangers of again packing people closely together. So we talked about things like having church outside, where you can more appropriately physically distance. We talked about having people in every other pew and six feet apart. We've talked about making sure you keep vulnerable people still protected. And that's an important part even during reopening."