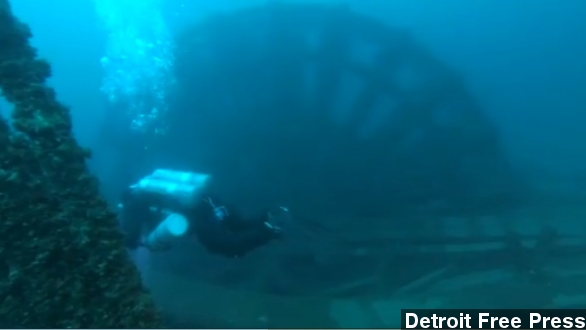 More than 150 years after sinking, a wooden steamer has made a new appearance thanks to shipwreck hunter David Trotter.

Trotter announced Monday he and his crew found the wreckage of the Keystone State in Lake Huron. (Via Detroit Free Press)

"It is a rare and great opportunity to swim back into history and see the Keystone State for the first time since it was lost in 1861." (Via Detroit Free Press)

The ship's fateful last journey was back in November of 1861. Historians say it could have been secretly transporting supplies for the Civil War. All 33 crewmen died in its wrecking.

At the time, the Keystone State, known as a palace steamer, was the second-largest steamship on the Great Lakes.

The ship was more than 300 feet long and had paddle wheels on either side stretching 40 feet in diameter.

The Keystone State was rediscovered more than 40 miles from where it was thought to have gone down. It's now submerged in 175 feet of water.

That kind of depth reportedly makes it difficult for divers to explore for more than 15-20 minutes at a time, according to MLive.com.

Trotter and his team first made the discovery in July and have completed several dozen dives to the site since then.

The team hasn't found any cargo yet, but Trotter says the original crew could have thrown it off in a last-ditch effort to stay afloat.