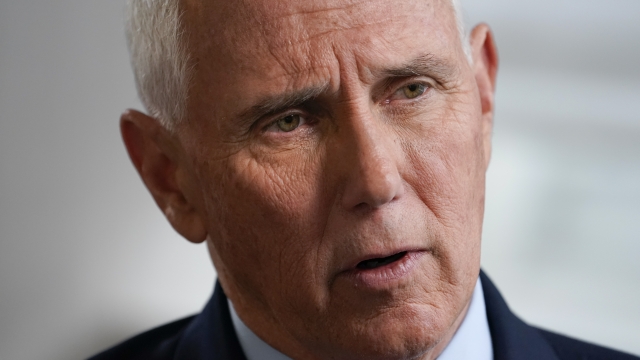 Pence joins the growing list — which includes Trump and Biden — to have had confidential documents recovered at their private residences.

Documents with classified markings were discovered in former Vice President Mike Pence's Indiana home last week, his lawyer told the National Archives in a letter — the latest in a string of discoveries of confidential information in private residences.

The records "appear to be a small number of documents bearing classified markings that were inadvertently boxed and transported to the personal home of the former vice president at the end of the last administration," Pence's lawyer, Greg Jacob, wrote in the letter shared with The Associated Press.

He said that Pence "engaged outside counsel, with experience in handling classified documents, to review records stored in his personal home after it became public that documents with classified markings were found in President Joe Biden's Wilmington residence."

The search followed the discovery of other classified documents in the president’s home library from his time as vice president.

The Justice Department already is using special counsels to investigate the presence of documents with classification markings taken from the Florida estate of former President Donald Trump and from Biden’s home and former Washington office. The department says roughly 300 documents marked classified, including at the top-secret level, were taken from Mar-a-Lago, and officials are trying to determine whether Trump or anyone else should be charged with illegal possession of those records or with trying to obstruct the months-long criminal investigation.

Pence's lawyer said in his letter that the former vice president "was unaware of the existence of sensitive or classified documents at his personal residence" and "understands the high importance of protecting sensitive and classified information and stands ready and willing to cooperate fully with the National Archives and any appropriate inquiry."

Jacob said that Pence immediately secured the documents that were discovered in a locked safe. And according to a follow-up letter from the lawyer dated Jan. 22, FBI agents visited Pence's residence to collect the documents.

Pence told the Associated Press in August that he did not take any classified information with him when he left office.

Asked directly if he had retained any such information, he said, "No, not to my knowledge.”

In a January interview with Fox Business, Pence described a "very formal process" used by his office to handle classified information as well as the steps taken by his lawyers to ensure none was taken with him.

“Before we left the White House, the attorneys on my staff went through all the documents at both the White House and our offices there and at the vice president’s residence to ensure that any documents that needed to be turned over to the National Archives, including classified documents, were turned over. So we went through a very careful process in that regard," Pence said.

Though redactions cover about half of the filing, information shown reveals a "significant number of civilian witnesses" gave information.