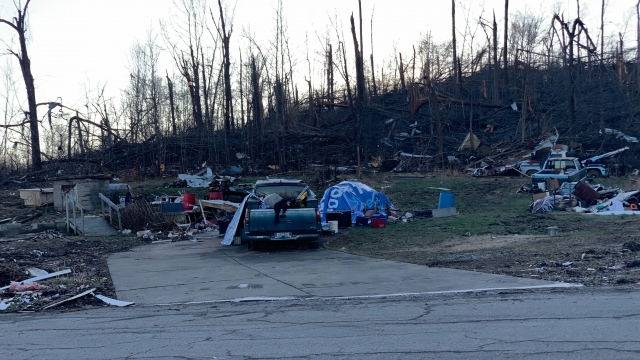 Newsy revisited Kentucky one month after a swarm of tornadoes and touched base with three of the thousands of lives forever changed.

Just 30 days ago a swarm of tornadoes killed over 70 people and left thousands without homes in Kentucky.  Newsy went back to see how people's lives have changed.  On a December night, a miracle rescue in rural Hopkins County — deputies found two baby brothers among front yard debris. Their grandmother, Clara Lutz, says a tornado sucked the tub they were in out of their house.A month later, she says the boys are doing fine."The three year old, who just turned four, he is following commands. He is growing like a weed, and I praise God for that," she said. "Caden, my 15-month-old, he came out unharmed, so I just praise the Lord that they're both doing well."It all started when Lutz heard the emergency alerts blaring from her phone. She says she grabbed her grandkids and two dogs and ran straight for the bathroom."I put on both of them in the bathtub. I put Dallas on one side and Caden on the other side, and I put the Bible between and I covered them up," she said. "I felt the rumbling of the house. I heard what sounded like a train coming and before I knew it, the tub went flying and I couldn't hold on to it. And I said, Lord, please keep them safe. Lord, whoever you send up here, please direct them straight to my boys."Thirty miles away in nearby Muhlenberg County, Jordan Blaize hid in his basement as the ferocious storm destroyed most of his home. His piano is amidst the rubble, still standing.Searching for a moment of peace, he played his waterlogged piano with missing keys. "I'm not sure if we'll rebuild exactly here, but I can't imagine being far," he said.After the video went viral across the nation, Blaize was invited to an even bigger stage at the Opry in Nashville. In the days after the tornado, we told the story of discovered siblings Sean Lynch and Judy Saxton. Lynch made the 14-hour trip from Colorado to Mayfield to meet his sister and bring her storm supplies.Both say they still speak to each other frequently and they're elated to have found another family member."I got 67 years to catch up, you know, and she's the oldest," Lynch said. "The only thing she knew about her dad, Charlie, is that he had a baby with another woman. I was the baby."