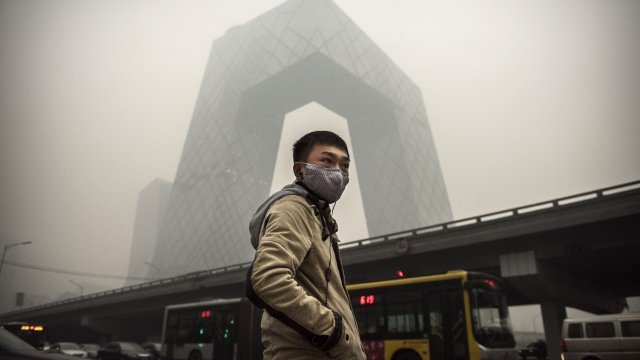 China’s air pollution is unlike anything most Americans know. On bad days, it looks less like smog and more like fog, completely masking buildings from just a few hundred feet away.

"In the night, you would only see the light, not the building," said Huang Wei, a campaigner for Greenpeace in Beijing.

Air pollution is part of daily life in Beijing. Checking the air quality is like checking the weather.

The air quality index, or AQI, measures the concentration of pollutants. For our purposes, it's not important to understand how it works — what is important is an AQI above 150 is considered unhealthy. Anything above 250 is considered hazardous.

Wei is something of an expert on bad air quality in Beijing and what makes it that way.

It gets a little scientific, but the people who know how this works are worried about one of these chemicals in particular: PM 2.5.

In The US, Minorities Are Exposed To More Air Pollution

Race, not income, age or education, is the main thing influencing how much pollution someone is exposed to. And minorities are exposed to the most.

"PM" stands for particulate matter. The 2.5 is its diameter, 2.5 micrometers. A piece of human hair typically has a diameter of about 75 micrometers. That's how small these things are.

It's what's measured when you see headlines about health warnings in Beijing because of air pollution.

"The standard for pm 2.5 is 35 micrograms per cubic meter, and Beijing's yearly average last year was 73," Wei said. "PM2.5 is the major air pollutant in China. And it is very small and very light. Its surface is very big so that heavy metals and other harmful organisms could cling to the particles. And because it's light, it lingers longer in the air, increasing the chance of humans inhaling them. And because it's very small, it could penetrate deep into your lungs. And that could, at worst case, cause cancer and heart attack."

It's for that reason that Beijing has a so-called "red alarm." The system warns residents about going outside because the air quality is that bad. Schools close, and car traffic is restricted beyond what's normal.

Beijing is the capital of the country the European Commission says puts more CO2 into the atmosphere than any other. Accounts conflict on whether China is actually the world's worst polluter. It depends how you read the numbers.

But what can't be disputed is that air pollution in China is very, very bad.

"There was a really bad episode in 2012 after which the government at the very top level, they've declared a war against air pollution," Wei said.

In October 2013, the government came out with the Atmospheric Pollution Prevention Action Plan — a fancy name for new standards.

The government wanted to reduce emissions, control coal use and clean up the air.

But a year and a half later, a top Chinese political leader said he was disappointed the  government wasn't getting the country where it needed to be.

China's government and organizations like Greenpeace aren't necessarily having trouble changing things in the big cities, but change outside the urban jungles is a different story.

China's Air Pollution Might Be Causing Its Residents To Die Early

A new study says particle air pollution causes northern Chinese people to die about three years before those in the southern region.

"The law requires cities that haven't reached the air-quality standard to draw up a road map and deadline towards reaching the standard. But now only six cities have done that," Wei said.

"I believe there is no practical difficulty in drawing up a plan," Wei said. "The only problem is willingness."

Besides health concerns and the global spotlight on climate change, if China is looking for another reason to up the ante on fighting air pollution, U.S. President Donald Trump might have just given it one.

"Immediately after Trump's withdrawal from the Paris agreement, China and the European Union has announced, collectively, that they would stay to support the Paris," Wei said.

As arguably the world's biggest polluter, China is well-poised to make itself a leader of climate change reform.

"Air pollution and carbon emission are two syndromes of the same illness: that China’s economy is heavily reliant on heavy industry, and China’s energy structure is heavily relying on coal," Wei said.

In fact, China is the world's single biggest coal consumer. China burns almost half of the world's consumed coal annually, according the U.S. Department of Energy.

But reducing coal consumption isn't straightforward for China. There are concerns the country's eco-friendly pursuits could slow one of the world's leading economies, and despite the country trying to harness renewable energy, some of the huge wind and solar farms it built sit unused. That's mostly because China's energy grids aren't built to carry energy from rural farms.

As China tries to wean itself off of coal, it looks to other methods to fuel necessities like transportation.

There's evidence of that in the cities, but in reality, the motivations for climate-friendly transport are mixed. Along a street outside a popular Beijing park you can see a budding form of eco-transportation: electric bikes.

Tianran He has been a resident of Beijing for years and has seen the city's transportation habits morph.

"In China there's — it's not as image-conscious as it is in the U.S. when you drive an electric vehicle. You know, maybe if you drive a Prius, you're kind of an environmentally-friendly hippie. Here, people drive electric vehicles out of necessity," he said, citing the city's crowded streets. Electric bikes offer Beijing residents a cleaner, and sometimes quicker, way to get around.

And it doesn't hurt that electric bikes don't spew pollution.

Even as China's government works the numbers and the policy on paper, people in the street are doing their part, even if it’s mostly out of convenience.

Electric bikes and bike-share services, both popular in Beijing, are part of an equation that adds to wind and solar farms, cleaner factories and plans for China's smaller cities. It all seems to be a game plan for a potential new phase of global leadership.