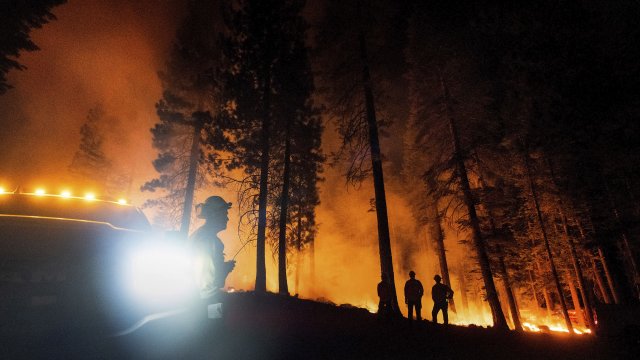 A temporary break in the weather provided firefighters in Oregon and Washington state to get the upper-hand on two major wildfires.

CalFire spokesperson Kevin Colburn said the cooler temperatures and slower winds helped curtail the spread of the massive Dixie Fire in Northern California: “We haven't had as much growth as there had been in the prior days, but all it takes is a weather change.”

Weather conditions deteriorated on Thursday, with stronger winds and higher temperatures creating red flag warning situations in Oregon and California. High pressure and heat advisories were reported in the area where the Dixie Fire was burning.

The fire had forced thousands of residents in Quincy, California, area to evacuate. But, some residents, like Jason Ackley, ignored the evacuation order. Ackley stayed at his house to clear the ground debris in an attempt to defend his home from the fire.

“It was a big scare, but this is everything. This is all we have. This is what we fight for. I mean, if we don't have this, where are we going to go?”

The Dixie Fire has burned out cars and destroyed at least 40 structures. The blaze is threatening several thousand more structures.

The National Interagency Fire Center reports there are 82 fires burning across 13 states. So far this year, wildfires have burnt 1.7 million acres.

“We're close to four times the acres burned, year to date this year compared to the pace that was set last year.”

Wildfires are not just burning in the U.S. due to worsening conditions from climate change. Massive fires have also touched Spain, Turkey and Russia's Siberia region.