2019 Wrap-Up: A Growing Awareness Of A Worsening Climate 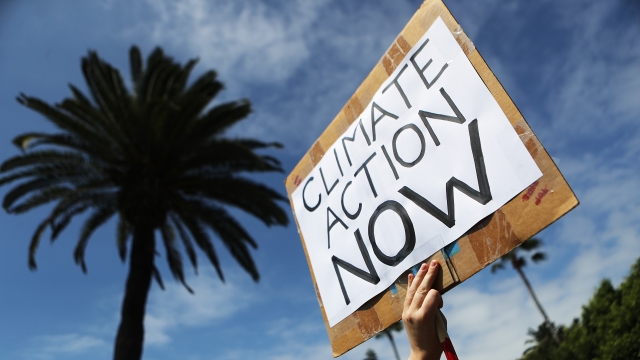 A look back at the measurement, management and often slow progress of climate change awareness in 2019.

2019 saw slow and sometimes regressive steps in the battle against climate change. Temperatures climbed and rhetoric sharpened — but there were also promising signs that more of the world is taking the problem seriously.

The first nine months of 2019 made it the second-warmest year to date since 1880. Ocean heat hit record highs, arctic sea ice dropped to the second-lowest extent ever measured and airborne CO2 reached its highest level in 61 years of record-keeping.

In September, a special U.N. report explained how this warming is affecting Earth's poles and oceans. Snow and ice cover is shrinking. Seas are rising as ice loss from the polar regions accelerates. And the hotter, higher oceans increasingly threaten ecosystems, food chains and cities.

On Nov. 4, the U.S. began its formal departure from the Paris agreement, making it the only country to back away from the pact.

The U.N.'s COP25 climate conference in December was also widely considered a disappointment. National stakeholders weren't able to settle on many significant commitments to cut emissions.

In short, as some observers put it, 2019 showed a climate crisis in the making. But it was also a platform for stakeholders who want to take more steps to address that crisis.

Does Calling It A 'Climate Emergency' Help?

More and more voices call the state of the climate an "emergency" or "crisis." Is that effective? And how do we respond to it?

At COP25, a coalition of U.S. states, cities and businesses committed to keep driving emissions down — which could make up much of the ground that the U.S. would officially cede if it leaves the Paris agreement.

Sub-National Stakeholders Plan To Keep US Working Toward Paris Goals

A coalition of states, cities and companies say they expect to keep their emissions on a downward trend through 2030.

More broadly, the looming climate risks have mobilized an activist movement like nothing we've ever seen before. Single voices, like Greta Thunberg's, drove huge conversations. 2019 saw the most popular global climate strikes in history, said to be 7 million strong. In the U.S., presidential candidates dedicated far more time to the question of climate than ever.

How Did Climate Change Become Such An Issue For 2020?

In the last decades and especially in the last few years, addressing climate change has become a flagship political issue.

Now, the trick is to act on that new awareness. As climate experts are fond of reminding us, ambitious measures will reduce climate risks for all of us going forward.