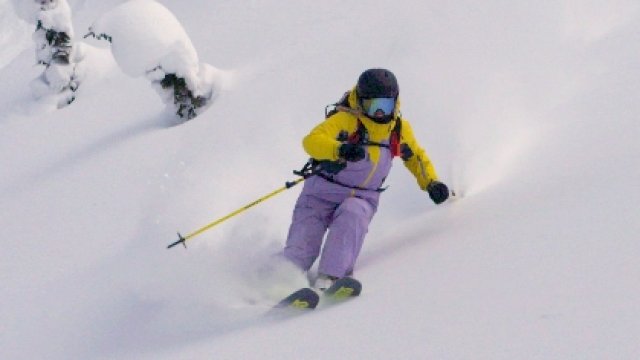 Out of all the expeditions professional snowboarder Jeremy Jones has taken on, he says this is one that will weigh heaviest on his legacy.

"I want to be able to look at my kids and say, 'You know what, I really tried to get our society on the right path in terms of climate,' and if I don't do that, then it would be hard for me to just sleep at night," Jones said.

After decades of chasing untouched peaks and immaculate lines, Jones has his sights on tackling a summit unlike any other: climate change.

"I was seeing changes to the mountains and it coincided with what scientists were saying," Jones said. "That on this current track, the planet is warming."

Jones became concerned with the changes he witnessed in the mountains, like rapidly melting glaciers, shrinking snowpacks and shortening ski seasons.

He saw the droughts and wildfires wreaking havoc in his home state of California, so in 2007, Jones founded Protect Our Winters — a nonprofit dedicated to mobilizing the outdoor community to advocate for policy that addresses climate change.

"From the start it was just like, you know what, I'm going to plant the seed, and either people are going to rally around it and help it grow, and if they don't, it's not going to grow," Jones said. "I can't do this on my own, so from the get-go, it's been about together, we can protect our winters."

Nearly 15 years on, Protect Our Winters (POW) has grown into a network of hundreds of athletes, scientists and creatives from all areas of the outdoor industry, all speaking out with concern not just for their sport, but for the future of the planet.

"I'm much more concerned about the global populace and what climate change does to all of us as a humanity than I am about skiing perfect powder in my backyard because I know that later in life, younger generations are going to look to us and say, 'Why didn't you do more? Why didn't you try?'" professional ski mountaineer Jim Morrison said.

Morrison has built his life around mountains. He says athletes hold a unique role when it comes to addressing environmental concerns.

"I think athletes play a role that speaks from their heart," Morrison said. "You don't really have to be a scientist to see the actual change in our environment. I feel this sense of responsibility to do what we can and be fairly desperate about trying to make a difference and trying to convince other people to get involved and make a difference."

But as many of these athletes, like professional skier Amie Engerbretson, will tell you, speaking out isn't always easy in a world of social media backlash.

"You feel like your career is at risk, and you're putting these things on the line and you're really exposing yourself in a vulnerable way," Engerbretson said. "But it's my charge, and I love my sport, I love my community and I love outdoor spaces so much that I can't let that fear, that intimidation, hold me back."

She says she's had to work hard to overcome that fear.

"I think sitting here and calling myself a climate activist is something that I would be super uncomfortable saying a few years ago," Engerbretson said. "I didn't think of myself as like a political person or a science-y person or even a particularly smart person, so I just felt like I wasn't qualified to care. Through POW I've been able to learn so much, which has then empowered me, which has then given me the confidence to use my voice."

With their perspectives and passions in hand, Jones and the POW network have carried their climate concerns to Washington, D.C.

"Capitol Hill is so much like going and climbing a peak," Jones said. "You use local experts to help navigate your route and terrain traps and all that stuff. When we do go to Capitol Hill, we really do focus on not the extreme right, not the extreme left, but people that are on the fence."

The goal is to put the system to work to preserve a common love of the outdoors.

Economics is helping put weight behind these personal testimonies and the scientific data.

"We learned early to frame climate as an economic issue, which it is," Jones said.  "I talked about my town not having clean air, the millions of dollars that a weekend of bad air does. Our coal mine is our chairlifts, like when that thing stops, it's devastating to all facets of the community."

According to a 2018 report by scientists with the University of New Hampshire and Colorado State University, in partnership with Protect Our Winters, more than 20 million people participated in downhill skiing, snowboarding and snowmobiling during the 2015-2016 winter season. Their participation added an estimated $20.3 billion in economic value to the U.S. economy through their spending at ski resorts, hotels, restaurants, bars, grocery stores and gas stations.

Dr. Elizabeth Burakowski is a climate scientist with the University of New Hampshire and helped conduct the 2018 report.

"A lot of the folks that have a vested business interest are really recognizing the trends now and talking about solutions and talking about advocating for policies that are going to help curb this problem and just be part of the solution, instead of just standing by watching the snow melt," Dr. Burakowski said.

Dr. Burakowski says winter weather can be preserved if action is done now, but she says if the planet stays on the trajectory it's on right now, there could be a substantial change in the colder months.

"I don't like the clock idea of saying as long as you do this within the next five years — like no, like now, and even not now, like yesterday this should have been done," Dr. Burakowski said. "Even when you talk about, you know, when we do act, New Hampshire's climate ends up being more like Pennsylvania is today."

While she's an avid snowboarder herself, Burakowski says it's important to not lose sight of the bigger picture.

"Honestly losing the ability to ski is probably one of our least concerns when it comes to climate change," Dr. Burakowski said. "It's a symptom of a much broader problem. The symptoms that other people are experiencing are much more severe — drought, fire, air quality concerns, flooding, hurricanes — I mean, these are things that take out your house, they take out your home, they force you to relocate, you can't go back. And I just want people to understand that that's the bigger issue, but the solutions to both problems are probably going to be linked."

Engerbretson says the best shot at finding that solution is through tapping into the skills and experiences within: "Everybody has been in a situation, whether you're a daytime hiker, an avid climber, whatever it is, you like to do camping, you come up against some unknown, some adversity and you've got to push through, and that's exactly what this moment in advocacy an outdoor state is all about."