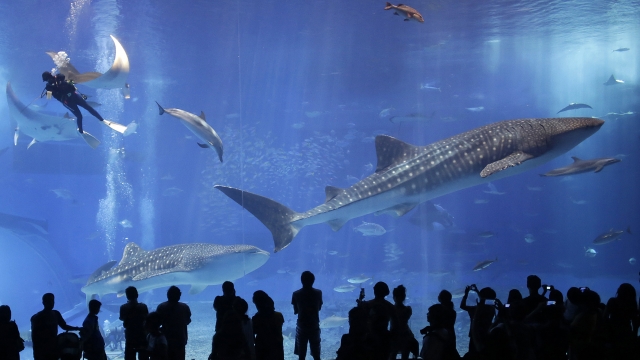 August 30 is International Whale Shark Day. While they're among the biggest creatures in the sea, they are now endangered.

There's a problem growing in the planet's oceans.

And it starts on the land. Rising greenhouse gases from man-made sources like coal plants and cars are changing the salinity, temperature and food chain in the oceans.

A new study predicts 90% of marine species will go extinct by the end of the century, without deep emission cuts.

And one of the most vulnerable is one of the largest in the seas: the whale shark.

They grow up to 40 feet long and weigh more than 21 tons. They're the size of a school bus with about 3,000 teeth. They filter 1,500 gallons of water per hour and reach mating maturing at 30 years old. They can live to the ripe old age of 150 years.

Unlike their relative, the great white, they're harmless.

Whale sharks play a critical role in the ocean. Just like a whale, they eat a large amount of plankton, regulating it so it doesn't generate dangerous algae blooms that can create ocean dead zones.

But the endangered whale shark is fighting for its survival.

Over the last 75 years the global population has been cut in half, and it's even worse in the Indian and Pacific oceans. They are home to the most whale sharks. There's been a 63% kill off there.

Because of their size they don't have any natural predators. It's humans that are killing them and overfishing them for their fins and meat, and changing their environment by increasing the water temperature. They can only live in water between 70 and 77 degrees. Their habitats are being destroyed and their food source is being disturbed.

This, added to their late mating maturity, is why the species is dying off. They don't live long enough to breed.

There are less than a quarter million whale sharks left in the world.