Clinton Criticizes Sanders, Says 'Nobody Wants To Work With Him' 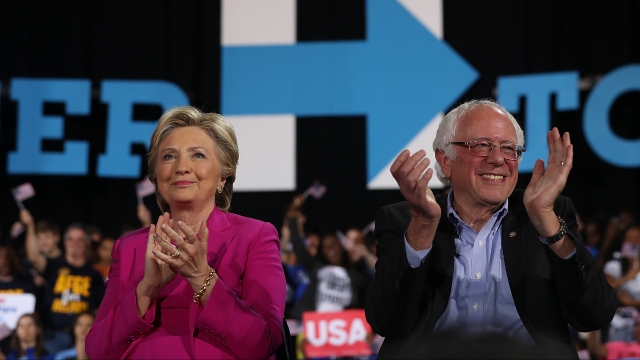 The former secretary of state also criticized "the culture around" Sen. Bernie Sanders and his campaign.

Former Secretary of State Hillary Clinton is refusing to say whether she'll endorse and campaign for Sen. Bernie Sanders should he win the Democratic presidential nomination.

In an interview with The Hollywood Reporter published Tuesday, Clinton criticized Sanders' campaign and what she called "the culture around him." She also doubled down on remarks she made about Sanders' career in an upcoming documentary about her life and failed run at the White House in 2016.

In the Hulu miniseries "Hillary", Clinton said: "Nobody wants to work with [Sanders]. He got nothing done. He was a career politician. It's all just baloney, and I feel so bad that people got sucked into it."

Clinton and Sanders both competed for the 2016 Democratic nomination, which Clinton won. And although Sanders went on to campaign on her behalf, she has said he hurt her chances by not supporting her earlier in the race.

Sanders is currently leading among the Democratic hopefuls in New Hampshire, and he's consistently placed near the top of nationwide polls since he declared his 2020 candidacy.

When asked to comment on Clinton's remarks, Sanders said "Secretary Clinton [was] entitled to her opinion" but that his focus was the impeachment trial of President Trump.