Clooney Agrees With Sanders About Obscene Amount Of Money In Politics 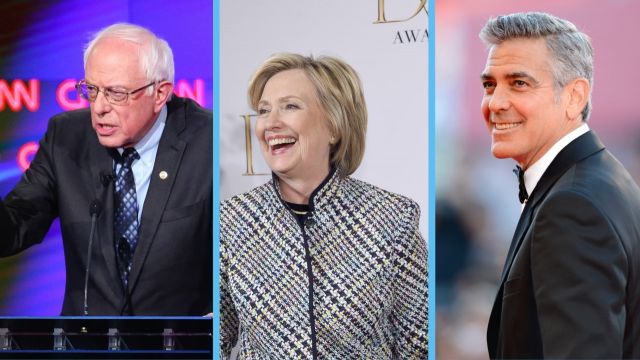 George Clooney calls the amount of money he raised for Hillary Clinton "obscene" and wants that kind of money out of politics.

Remember back in March when Bernie Sanders called a fundraiser George Clooney was planning for Hillary Clinton "obscene"? Well, the event was this weekend, and it turns out Clooney agrees with Sanders.

"It is an obscene amount of money. The Sanders campaign when they talk about it is absolutely right. It's ridiculous that we should have this kind of money in politics. I agree completely," Clooney told Chuck Todd on "Meet the Press."

The money raised at the fundraiser — where the most expensive seats cost around $353,000 — went to the Hillary Victory Fund, which is a joint campaign effort for the Clinton campaign and the Democratic National Committee.

Sanders appeared on CNN's "State of the Union" Sunday morning and responded to Clooney's comments, saying he had "a lot of respect for George Clooney's honesty and integrity on this issue." But when asked whether Clooney was "backing the wrong horse," Sanders said yes.

About 100 Sanders' supporters protested outside the fundraiser, even throwing actual money at Clinton's motorcade. Clooney told NBC that they were right to protest.

But Clooney also said that most of the money raised would go to other Democrats, like those running for Congress.

This video includes images from Getty Images and clips from NBC and CNN.