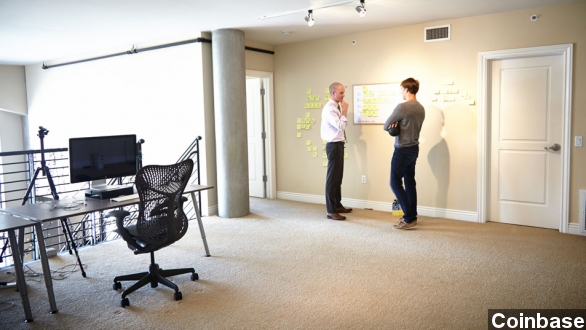 Digital currency service Coinbase announced it has raised $25 million in the largest single funding to date for a company focused on the bitcoin.

Bitcoin believers continue to bet on the future of their virtually fat wallets.

Digital currency service Coinbase announced Thursday it's raised $25 million in the largest single funding to date for a company focused on the bitcoin.

Venture capitalist and Coinbase board member Chris Dixon added his thoughts looking ahead, saying: "The designers of the Web built placeholders for a system that moved money, but never successfully completed it. Bitcoin is the first plausible proposal for an economic protocol for the Internet." (Via Coinbase)

This is the second round of fundraising, led by VC Andreessen Horowitz. It brings the total raised by Coinbase up to $31 million. The capital isn't the only blister; Coinbase now hosts around 600,000 users. That's up from 200,000 in May, according to The New York Times.

With an average of 10,000 sign-ups each day, Coinbase hopes the growing number of Bitcoin users will make merchants sign up as well. So far, the service processes transactions for 16,000 vendors.

Business Insider explains what makes Coinbase attractive is that the service has its hands in just about everything Bitcoin offers.

It's a digital wallet for consumers, a payment processor for vendors, and is currently developing software to integrate Bitcoin into applications. TechCrunch writes their enthusiasm could also be a "downside to the company," while competitors focus on being better at one specific feature.

So, what exactly does the eight-person company plan to do with $25 million? Its founders continue on the site:

--Continue to educate vendors on Bitcoin

--Building more products for adoption, including tools like SMS payments and recurring payments for subscriptions

With more ways to pay, more types of vendors and consumers are likely to join in.

Despite its dream to push Bitcoin further into the consumer space, some money managers — old and new — have criticized its potential.

​Most recently, accounting firm Ernst & Young and PayPal President David Marcus said Bitcoin "is not" and "will never be a real currency." (Via The Guardian, VentureBeat)

However, the money might talk louder. According to CoinDesk, today one bitcoin is valued at around $850 U.S. and reached peak value of nearly $1,500 at the start of December.