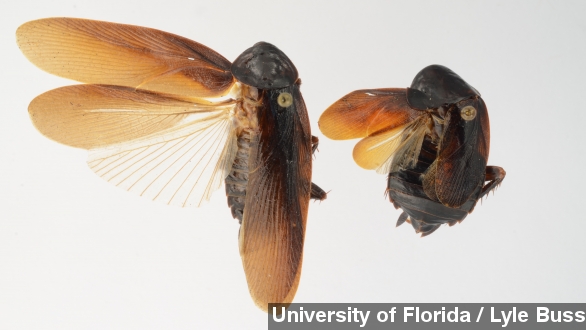 A newcomer to the United States, the Japanese cockroach is reportedly more resilient to both hot and cold temperatures than your average cockroach.

​They can reportedly live up to a week without a head and have been around longer than the human race — but some cockroaches in New York are now believed to have a new evolutionary leg-up.

"Biologists at Rutgers University says the bug is found mostly in Asia and it can survive very cold climates." (Via WNBC)

"It is very resilient, folks. It can withstand harsh winters like no other roaches." (Via WTVT)

It's a species known as the Japanese cockroach. A newcomer to New York City, it's reportedly more resilient to both hot and cold temperatures than your average cockroach. (Via Complex)

The globetrotting pest, spotted for the first time in the U.S., was discovered in the city last year when an exterminator found the bug at New York's High Line Park. (Via The Week)

He then sent the cockroach carcass to the University of Florida before it made its way to Rutgers and was subsequently identified.

So how did the creepy crawlies make their way here? Researchers aren't entirely sure, but they're guessing they hitched a ride.

"Scientists suspect the roaches were likely a stowaway in the soil from ornamental plants." (Via KRIV)

New York is, of course, well-known for its roaches. But according to one of the researchers who identified the bug, its arrival won't necessarily mean more total cockroaches. (Via Animal Planet)

"Because this species is very similar to cockroach species that already exist in the urban environment, they likely will compete with each other for space and for food." (Via Los Angeles Times)

And you can count out any mutant superroaches thanks to interbreeding. Another researcher tell LiveScience the new roaches are likely anatomically incompatible. "The male and female genitalia fit together like a lock and key, and that differs by species. So we assume that one won't fit the other." (Via LiveScience)

But if they're looking to multiply, they may have one advantage  — over exterminators. As The Wall Street Journal notes: "Now they'll also be able to just wait outside, even if you spray the whole building at once."

Given their evolutionary advantages, the new pests are likely here to stay. So how should we greet them?

Gothamist has one suggestion: a "warm welcome."

Correction: A previous version of this video misidentified the cockroach species. This video has been updated.