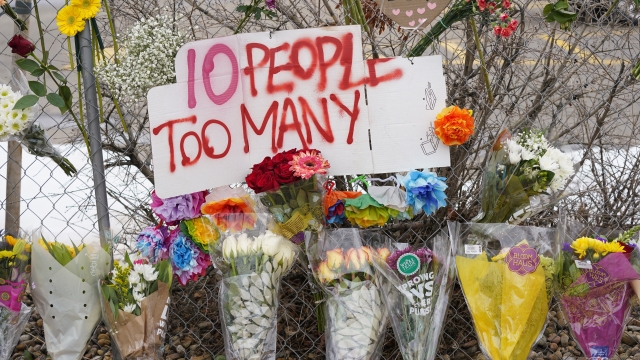 The suspect is charged with 10 counts of first-degree murder.

The suspect in the recent shooting in Boulder, Colorado is set to appear in court Thursday morning.

The 21-year-old man faces 10 counts of first-degree murder. He will be read his charges and his rights as a defendant, but will not be asked for a plea yet.

Hundreds of people gathered in Boulder for a vigil Wednesday to mourn the 10 people who were killed. It was one of several planned yesterday. They held a candlelight vigil outside of the Boulder County Courthouse with a moment of silence.

"Monday's events have made me feel many things like, I'm sure, many of you," said Boulder resident Elise Nardi. "But most of all, it has rekindled a desire to connect with my community and a sentiment that I'm sure many of you and those watching at home can understand."

Another vigil was held by the King Soopers grocery store, where a fence is now filled with signs and flowers for the victims.