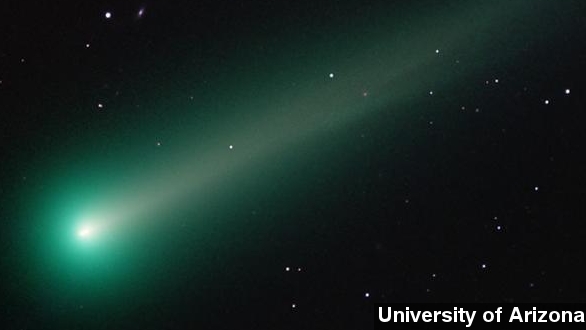 Astronomers thought comet ISON burned up as it blazed past the sun ... until the comet reappeared in pieces.

It's been a very confusing Thanksgiving in space. While most people were eating turkey, a frozen ball of rock and space dust dove past the sun, disappeared from view and then reemerged on the other side as a cloud of fragments. At least, that's what we think happened.

Comet ISON was first spotted by Russian astronomers in late 2012. It was predicted to slingshot around the sun and rocket off into interstellar space, giving Earth viewers a spectacular light show, if it survived its close encounter with the sun.

Astronomers tuned in Thursday to watch ISON brush past the sun — and that's where things started to get weird.

The comet flew into the sun's heat and disappeared, leading most observers to pronounce ISON dead on arrival.

"It does seem that comet ISON probably hasn't survived this journey. This could be the nail on the coffin."

But a few hours later, something emerged on the other side of the sun. Something which ended up looking suspiciously comet-shaped.

That smudge matches ISON's trajectory perfectly but is too faint and disorganized to be a full comet. Observers say it's likely the fragmented remains of the comet are reforming after ISON's nucleus disintegrated during its flyby.

So ISON lives on, at least in some form, and trying to figure out what it'll do next is driving astronomers crazy. Astronomer Karl Battams says whatever's left of ISON could fly past Earth, but it's still too early to tell.

"We have a whole new set of unknowns, and this ridiculous, crazy, dynamic and unpredictable object continues to amaze, astound and confuse us to no end."

And a Slate writer adds: "I've said it before, and I'll say it again: Comets and cats are equally predictable. It's a losing game to be firm with them; your best move is to watch, wait, and enjoy the show while it happens."

If there is anything left of ISON to see, it should be visible sometime around Dec. 2-4.