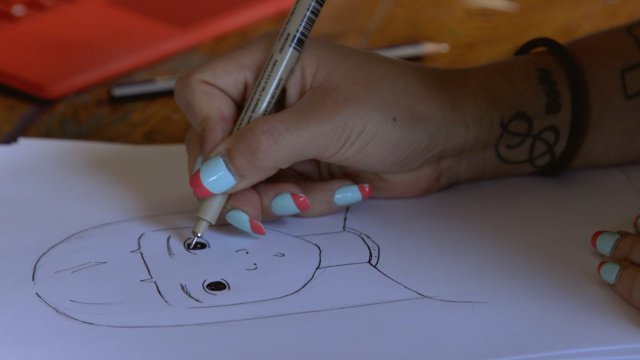 "Rosita Gets Scared" is a fictional story about an undocumented schoolgirl who learns to overcome her fears of deportation.

"Rosita Gets Scared" is a self-published and print-it-yourself 'zine about an undocumented schoolgirl named Rosita. She reflects on the fears she faces and how she copes with them.

"There's a lot of material out there that addresses children's emotions generally," Alvarez said. "When kids are scared of what's underneath their beds, that's one thing. But when you're scared of your mother literally being taken from you to another country that you are not familiar with, that's a very different sort of fear. And we have to create material that's culturally relevant to that particular fear."

She continued: "It went from a conversation about creating informational flyers on know your rights for young people, to can we make a comic out of this? Can we make it fun? Can we make it so that they can engage in it more easily?"

More than 9 million children in the U.S. have an undocumented parent, and half of these children, or about 4.5 million, are U.S. citizens, according to the American Psychological Association.

A recent study examined trauma levels in kids who were Latino citizens and found having an undocumented parent creates a risk to a child's mental health that's greater than being poor.

In January, the American Academy of Pediatrics warned that "the prolonged exposure to serious stress" these children face can harm their developing brain and "negatively impact short- and long-term health."

"It's a scary situation to confront, especially to fully inform your child about, and sometimes you just want them to remain a child and not know too much about what's going on," Alvarez said. "But at the same time, you don't want to put them in a position where if something were to happen, they're completely caught off guard. They have no sense of why an uncle might be taken away."

She added: "I've heard a lot of my older friends, now, who consistently tell stories that they didn't even realize they were undocumented until they were trying to get a driver license and they couldn't. That's how long we keep them in the dark. And again, it's every parents' personal choice, but to me, I think we underestimate kids; we underestimate young people. We just have to figure out how to speak to them so that they understand these situations that we think maybe are too sensitive for them.

"I grew up in a poor immigrant household in Texas. And when you're poor and when you're brown, you're pretty much focused on surviving — even when you're young. It's just something that I wouldn't want other children to go through. I would want their feelings to be validated — whether it is happiness or anger — especially in little girls. We shouldn't always be expected to smile for you.

"I remember always reading chapter books on, like, silly little white girl, which is fine, but I couldn't find one on silly little Latina girl or angry little Latina girl. It was very hard to find in my library. Ever since, I think that even in movies we're starting to see more representations of people of color even amongst superheroes, so everybody is really psyched about the 'Black Panther,' for example. Marvel has a new character named America who's a Latina, and she's queer. But again, we need more cartoons that center the kids of color as well. It will completely change the story.

"Whether it's the news, or even sometimes if it's our own stories — people of color, poor people — the stories sometimes end up being sob stories, tragic stories, and that ends up defining your entire existence.

"In the comic, we learn that she likes cake, and we learn that she really likes her fidget spinner. And you can probably gather she only lives with her mom for now. That might be her only family member, but that's OK. So even that she's being raised by a single parent, that's her life. It is what it is."