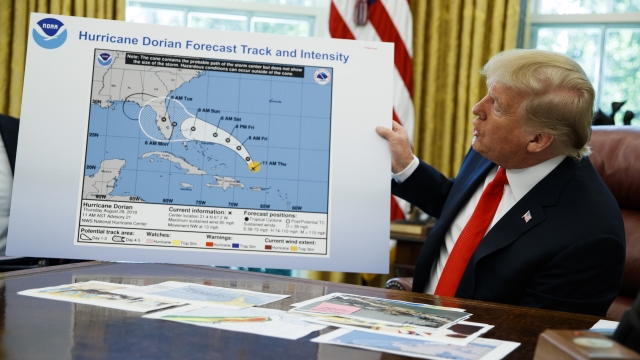 Report finds actions by Department of Commerce and President Trump could have chilling effects on public trust of National Weather Service forecasts.

A watchdog report is criticizing the Department of Commerce for siding with President Trump over a misleading Hurricane Dorian forecast in 2019.

At the time, President Trump showed an image of the hurricane's path which included a hand-drawn extension into an area of Alabama to match his own previous comments on where the storm would go. The incident prompted the National Weather Service office in Birmingham to take to social media tweeting that Alabama would not see any impacts from the storm.

The Inspector General says the White House then had top Commerce Department lawyers help craft a statement from the National Oceanic and Atmospheric Administration rebuking the National Weather Service’s claim.

According to the watchdog report, the actions by the Commerce Department and President Trump could have a “chilling effect” on the forecasters’ future public safety messages and undercut public trust in the National Weather Service.

The department's acting general counsel denies the findings of this report.

This report follows a scientific misconduct investigation earlier this month that found National Oceanic and Atmospheric Administration officials violated their ethical standards and scientific integrity policy when they issued conflicting statements during the hurricane.