Sponsors Flee Tucker Carlson, But Some Say A Boycott Isn't The Answer 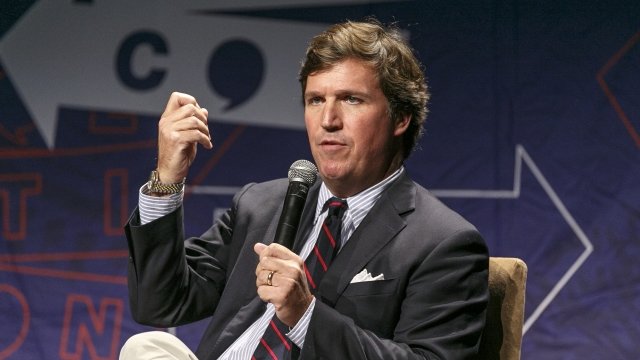 Carlson's comment that poor immigrants make the U.S. "dirtier" was incendiary, but so is the way activists are confronting him.

Fox News host Tucker Carlson has lost at least 20 advertisers because of this comment he recently made on his show:

"We have a moral obligation to admit the world's poor, they tell us, even if it makes our own country poorer and dirtier and more divided."

The retreat from advertisers — including IHOP, Ancestry.com and Jaguar Land Rover — comes as activists and progressive organizations are urging more sponsors to abandon "Tucker Carlson Tonight."

The letter also asserts the network will continue "to condone this vilification ... until advertisers ... say, 'Enough.'"

In another show, Carlson defended his comment that poor immigrants make the U.S. dirtier by showing images of trash left by migrants in a Tijuana camp.

He also claimed that the political left was encouraging a boycott against him simply because they dislike his opinions.

"Those who won't shut up, get silenced."

But beyond arguing over Carlson's inflammatory comments, observers are also debating the tactics used to boycott him.

Politico's Jack Shafer argues holding advertisers accountable for the content they subsidize is a slippery slope that could eventually hurt journalism. The columnist encourages activists to "picket Fox headquarters" instead. Otherwise, he writes, "it's easy to imagine today's boycotts turning into tomorrow's blacklist."

In response, advocates of the boycott say that in a free market like the U.S., consumers and advertisers have every right to use their leverage to punish what they see as Carlson's racist behavior.

That leverage has been effectively used in the past to oust other Fox News anchors.

Last year, Bill O'Reilly was pushed out after dozens of corporations pulled their ads from his show. That backlash was prompted by reports he had reached settlements with women who accused him of sexual harassment.