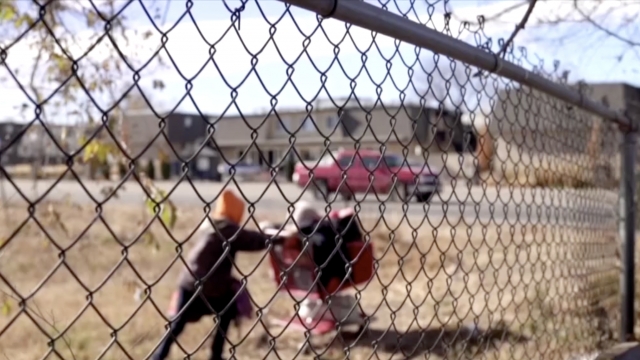 Community organizations are building the infrastructure to help in areas where government hasn't put resources in place.

The winter months are the hardest time for those experiencing homelessness to get resources, especially in suburban communities.

"You're not supposed to be in most places," Marilynne, who is currently experiencing homelessness, said. "Most homeless people … try to be under the radar, try not to make problems."

"You probably have no idea how many people are on the street in your community," said Lynn Ann Huizingh, executive director of Severe Weather Shelter Network.

Every community has people hurting.

"Homelessness is becoming a lot more visible in the suburbs, because it's growing," Heather Greenwood said. "Our economic challenges and affordable housing crisis are escalating, so we're seeing it affect all communities."

Greenwood opened GraceFull Café and made it her mission to help those on the street find a place they can trust.

"We are a pay what you can cafe," Greenwood said. "There's not shelters outside of big downtown areas, typically, and that's true in our area."

That's why she provides free meals and connects those struggling with job help and places to sleep.

"I lost my job, that's when financial stuff got hard, and they do have resources, and they help people that help best they can," Jeramia Osborne said.

Resources for shelter become a matter of life and death as the coldest months of the year set in.

"Every day, it's very frightening, scary in lots of ways," Marilynne said. "Shelter is not affordable, and it's not plentiful. It's really difficult to try and be in at least a covered area, let alone protected, safe."

But she and other people without a permanent house are finding hope this winter as businesses like Greenwood's and other nonprofits are banding together.

Where county and city resources don't exist in suburban areas, community organizations are building the infrastructure to help.

Nonprofit groups formed a network to stop homelessness in the suburbs just south of Denver.

"People need a place to stabilize before they can become a functional part of society again, and that's their desire, just like anybody else's desire," said Huizingh.

On the coldest nights of the year, she shelters people in hotel rooms. It helped Eric survive last winter, and this year, he is now in housing of his own.

"It's awesome," Eric said. "You actually felt like a human being ... and that, you know, the universe is listening to you. And, you know, there are people that care."

Both Huizingh and Greenwood know their friends on the streets need a centralized place for resources.

But while their cities plan for that, they will be there in support.

"I hope that we can be a voice in the community to be a part of that educational awareness piece and create hope and invite people into being part of the solution," Greenwood said.

Marilynne and Eric say the key to a solution is support from the rest of the community because compassion in this trying season is what can make all the difference.

"Homelessness is always going to exist, always," Greenwood said. "That doesn't mean that we can't improve the lives of a lot of people."