The Long-Haul COVID Fight: Inside A Comprehensive COVID Center 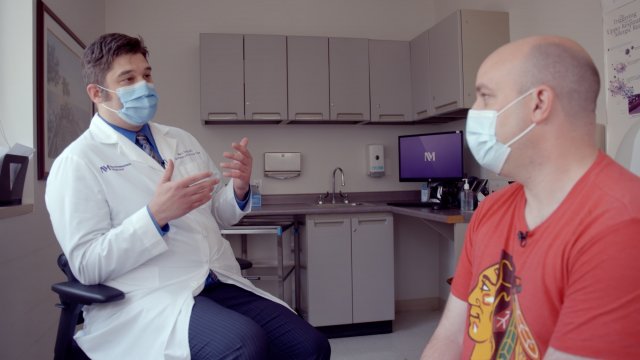 The 38-year-old Malia is coming off of a Father’s Day that's been flanked by months of long-haul COVID symptoms.

"My five-year-old especially worries. His biggest concern is that Daddy's going to die," he said.

The change from healthy to chronically unhealthy is scary. Long-haul COVID is associated with a higher risk of death. And like so many, Malia just wants to get back to something close to normal.

His days went from running between two jobs, going to school and keeping up with two young kids...to chest pains, shortness of breath and sleeping for 14 to 16 hours at a time.

Finding out why he’s not getting better has been a struggle.

"I've seen every kind of specialist imaginable and everybody is like, 'I don't know what to do with you.' So that’s been the hard part," he told Newsy.

"We really haven't focused a lot of the medications and care on this long-haul population," Dr. Charles Davidson tells Newsy.

Davidson oversees the Comprehensive COVID-19 Center at Northwestern Memorial Hospital in downtown Chicago. The second in the U.S., it opened in December of 2020. So far, they’ve seen more than 1,100 patients, and hundreds more are trying to get in. Right now, it takes one to three months to get an appointment.

Lindsey Theis: "Talk to me a little bit about the patients that you're seeing now"

Davidson: "Only about 14, 15% have actually been hospitalized. Two thirds are women, and the average age is less than 50."

What makes these comprehensive clinics different? Here, a patient gets assessed and their case reviewed by an entire team of specialists depending on their symptoms: from lungs to brain, heart to kidney, blood to mental health.

But comprehensive COVID centers like this one at Northwestern Memorial in Chicago are rare.

"There's about 40 centers like this around right now. I think it's difficult for patients actually to find these centers. There's a lot of places that pop up, but many have a pulmonary clinic or they have a neurology clinic, but not necessarily are they working together," said Davidson.

"Standards of care for long-haul COVID patients are definitely lacking at this point because we know so little," said Dr. Marc Sala,  a pulmonologist at Northwestern Memorial Hospital's CCC.

Sala sees patients like Patrick Malia with, he says, brain fog. Lasting sometimes nine months or longer. His biggest frustrations: that he can’t give better answers.

Right now, all they can do is look at all the symptoms and patterns in patients and try drugs typically used for other illnesses for that. And lots of tests to make sure that there’s not something underlying and worse. The big thing here is to let patients know to be patient.

"There is hope out there that individuals who have long COVID will feel better. For a lot of people, that's taking a very long time. However, I don't have a lot of patients who aren't getting any better, and that gives me a lot of hope," Sala said.

For Malia, it made all the difference. He knows there’s a lengthy road ahead. But now knowing that, he’s got some newfound optimism.

"I've gotten good information, I've got a plan of action, things like that. And that's really helped," he said.