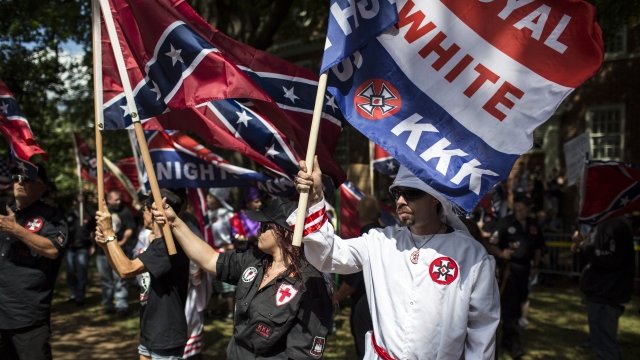 Congress unanimously approved a joint resolution denouncing the violence in Charlottesville, and it calls on President Trump to condemn hate groups.

Congress passed legislation condemning last month's violence in Charlottesville, Virginia, and it calls on President Donald Trump to speak out against hate groups.

The House and the Senate unanimously approved the joint resolution this week. It could land on Trump's desk for his signature as early as Wednesday.

The measure specifically denounces "White nationalists, White supremacists, the Ku Klux Klan, neo-Nazis, and other hate groups" and urges the president to do the same.

Trump was widely criticized for blaming both counterprotesters and protesters with the so-called alt-right for the deadly demonstrations in Charlottesville.

Charlottesville Man Reflects On White Nationalist Rally In His Town

A Charlottesville man reflects on the now infamous events in his town. He fled his home because of fear for his own safety due to his race.

"We condemn in the strongest possible terms this egregious display of hatred, bigotry and violence on many sides, on many sides," Trump said.

Lawmakers hope this resolution will help bring healing to those affected by the violence.

Virginia Congressman Gerry Connolly said, "I hope this bipartisan action will help heal the wounds left in the aftermath of this tragedy and send a clear message to those that seek to divide our country that there is no place for hate and violence."